A newspaper reporter discovers his best friends are launching a home-grown terrorist attack in NYC.
Nail-biting drama shows the “other side” of terrorism: how people who enjoy our way of life might turn against this country. 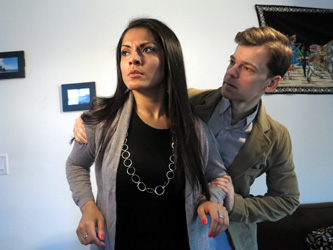 NEW YORK – “Blind Angels” by Dick Brukenfeld is a nail-biting drama in which a news reporter (inspired by Daniel Pearl) is taken prisoner by a group of cosmopolitan, integrated, successful, secular Muslims who are embarking on a terrorist attack. The twist is, he has long relationships with two of his three “hosts”–one is his ex-fiancee and the other was his college roommate. They are playing an endgame scenario that dwarfs what any small fry terrorist has tried before and they need him to tell their story. Theater for the New City, 155 First Ave., will present the play’s world premiere run February 6 to March 2, directed by Melissa Attebery.

Playwright Dick Brukenfeld is a former reporter for the Boston Globe and Lowell Sun who was a theater critic for the Village Voice for six years. He writes, “I felt a kinship with Daniel Pearl. He was out there doing what all of us dream of–getting the crucial story that wasn’t being written, finding out who the terrorists were and what was motivating them. Unfortunately, the people holding him were too dumb and vicious to recognize the opportunity he was offering.” In this play, they do.

The newsman, named Aaron Samzer, is the son of a rabbi who opposed his marriage to one of the Islamic cosmopolitans who are holding him. He is entrapped by friends he loves, who are planning hit New York City with “a small catastrophe to prevent a larger one.”  All three are American citizens and not fanatics; two are Ivy League educated jet setters and all of them know they need this trusted, Jewish newsman to tell their story.

The playwright explains, “I wanted to write a play that would look at the other side of terrorism. My goal was to get beyond the self-serving cliché ‘they want to destroy us, because they hate our way of life.’  I felt I could get closer to the truth by exploring why people who enjoy our way of life might turn against this country.”  What emerged is a keen analysis of why people who enjoy this country’s bounty and its freedom of expression would resort to violently attacking it.

Brukenfeld adds, “Knowing him from news reports, Pearl is stamped in my mind as enterprising, compassionate, and brave–an iconic figure, a finished product.  To create a  reporter-held-by-terrorists play that avoids melodramatic clichés, I needed a main character who is a work in progress.  Aaron is a man who covers his insecurities with bursts of anger or humor. He has a hard time committing himself.  I also needed terrorists who were more evolved and complex than Pearl’s killers.  This is why ‘Blind Angels’ is not ‘based on’ but ‘inspired by’ Daniel Pearl.” 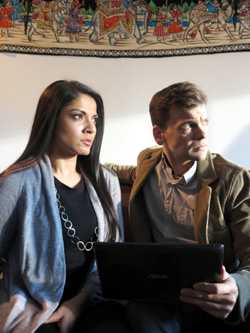 The complexity of the terrorists is artfully drawn, especially in their ambivalence toward Aaron, whom they have faith in to convey their message and at the same time, need to hold as a prisoner.

Dick Brukenfeld’s other full length plays include “The Big Broadcast on East 53rd,” produced at the Manhattan Theatre Club and La MaMa, “Extenuating Circumstances – America and China, the First Incident,” produced at the Perry Street Theatre, and “Muscles of the Heart,” which has had public readings in Sarasota and NYC.  WHDH-TV Boston produced his one act “Big Game,” and David Dretzin optioned his screenplay “Domino.”  He directed several comedies off Broadway including Carl Sternheim’s “The Underpants” at Perry Street Theater and his “The Snob” in a production at Circle Repertory Theater.

Director Melissa Attebery held positions in TV development and production at Paramount, Viacom and Granada Entertainment before moving to the New York stage, where she has developed and produced original works by Caridad Svich, Vanessa Shealy, Mark Finley, J. Julian Christopher, Carla Ching, Aurin Squire, Susan Merson, Phil Schmiedl, Leslie Bramm, Matt Casarino and Joe Godfrey at venues including Primary Stages, The Abingdon, HERE, Queens Theatre in the Park, FringeNYC, The Players, TADA and Westbeth. She has also directed works by Arthur Miller, Tennessee Williams, Nicky Silver, Sam Shepard and Ionesco. Her regional credits include plays by A.R. Gurney, Lee Blessing, Ken Ludwig, Eric Bentley, Jane Chambers and Doug Wright. She holds a BA in Dramatic Art and Film Studies from UC Santa Barbara and an MFA in Directing from the Actors Studio Drama School. She is a member of The Actors Studio Playwright/Director Workshop, an Associate Member of SDC and a resident director at Emerging Artists Theatre, where she served a two-year term as the Directors’ Company Manager. (www.melissaattebery.com)

Playwright Dick Brukenfeld writes, “I’ve been a fan of Theater for the New City since the 1970’s, when I discovered it as a Voice theater critic.  But working there now to put on my Blind Angels has been a revelation. Not only is this three-theater-plus-cabaret complex a welcoming venue for new plays, but Theater for the New City develops new audiences by presenting live theater at cinema prices. Bless Crystal Field and her crew for the support they’ve given our team.”