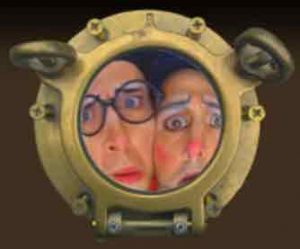 An Epic Tale of Two Explorers, a Tiny Submarine

The Lynn Redgrave Theater at Culture Project is located at 45 Bleecker Street in New York City.

THE SUBMARINE SHOW tells the story of two explorers who crash their tiny submarine at the bottom of the ocean and embark on an epic journey filled with surprise and wonder. Unfolding like a cartoon, THE SUBMARINE SHOW is a mad-cap journey from the ocean to the sky and back, full of nonstop physical entertainment and Jaron and Slater’s signature storytelling where adventure reigns supreme, nary a word is spoken and no two shows are the same.

This award-winning comedy has toured the world to rave reviews and standing ovations since 2009, winning “Best in Fest” at the San Francisco International Fringe Festival, “Best of Fringe” at the Kansas City Fringe Festival and “Hot Pick” by the Edinburgh Scotsman.

Slater Penney received an Emmy Award for his motion capture work and is an accomplished dancer, acrobat and physical comedian. Jaron Hollander is a former Cirque du Soleil clown and the Artistic Director of the Kinetic Arts Center, a circus arts and physical theater training and performance center located in Oakland, California.