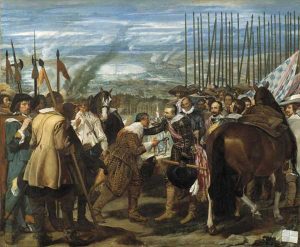 The Splendor of the Spanish Renaissance

The Choir of St. Luke in the Fields
David Shuler, music director

The Church of St. Luke in the Fields
487 Hudson Street

Beginning roughly at the time Columbus voyaged to the New World, and ending around 1659 with the Treaty of the Pyrenees, the Siglo de Oro (Spanish Golden Age), was an inspired flowering of music, art, and literature. It was into this world of opulence, financed in no small part by the empire’s vast holdings in the New World, that Spain’s most celebrated artists made their enduring contributions. Alongside the paintings of El Greco and Diego Valásquez and the prose of Miguel de Cervantes and Lope de Vega were brilliant and intensely spiritual compositions of Francisco Guerrero, Tomás Luis de Victoria, Alonso Lobo, and Cristóbal de Morales, but four of the many composers that defined the Spanish School. The concert will feature Guerrero’s  Missa De la batalla escoutez  and motets by all four composers.