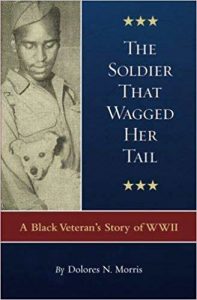 Admission is $10 for guests and $5 for Museum members.

Plus visit this page here to learn more about this event…

“”You’re invited to join [them] on Sunday, January 27 2019, 3:00 – 5:00 pm when Dolores N. Morris will speak to us about her book The Soldier That Wagged Her Tail – A Black Veteran’s Story of WWII. Her father, William A. Morris, Jr. served in both the European and Pacific theaters. He departed from and returned to Pouch Terminal, Stapleton, SINY at the end of his tour of duty. The book recounts the stories he told of World War II, acquiring Trixie, the terrier dog (or did she acquire him!) and their  participation in the D-Day invasion of Normandy and the Battle of the Bulge.

Sadly, Mr. Morris passed away in May of this year after a lifetime of community service. He was a wonderful example of a true Patriot, serviceman, father, friend and community leader.

Dolores N. Morris is a sixth generation Staten Island native. She is widely recognized for her work in television at such prestigious companies as Children’s Television Workshop, ABC Television, Walt Disney Television and HBO. Her career has spanned 30 years of producing award winning family and children’s programming, resulting in 3 Peabody Awards, an Oscar mention and 5 Emmy awards.””