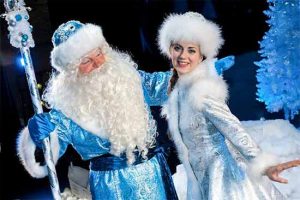 Brooklyn Center for the Performing Arts at Brooklyn College will team up once again with producer Anton Krilloff present a Russian holiday fairy tale, The Snow Maiden (Снегурочка), on Sunday, December 20, 2015 at 4pm. Ticket prices range from $35 to $60 and can be purchased at BrooklynCenter.org or by calling the box office at 718-951-4500 (Tues-Sat, 1pm-6pm). The running time is 1 hour and 10 minutes with no intermission. The Snow Maiden is performed in Russian with English subtitles.

The Snow Maiden premiered in 2008 in Moscow. The creative team on this show includes an honored Russian writer and director Boris Boreyko (The Bremen Town Musicians), director and choreographer Andrey Ivanov, and costume designer Tatyana Kudryavtseva. All costumes were created by the Mariinsky Theatre tailors. http://www.thesnowmaiden.com.