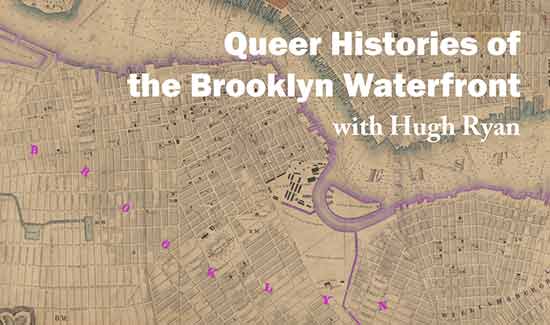 The Queer Histories of Brooklyn’s Waterfront

A special lecture in honor of Pride Month

This event will be held at the Melville Gallery at 213 Water Street. Doors open at 6:15 PM. Reception to follow the talk.

Please join the Seaport Museum for this special lecture, The Queer Histories of Brooklyn’s Waterfront, by Brooklyn-based writer and curator Hugh Ryan.

In Brooklyn, queer history began along the waterfront, from the docks of downtown Brooklyn to the factories of the Brooklyn Navy Yard, to the seaside amusements of Coney Island. In this talk, Hugh Ryan covers 100+ years of queer Brooklyn, from Walt Whitman to WWII and beyond.

Hugh Ryan is a writer and curator based in Brooklyn, whose book, When Brooklyn Was Queer, chronicles the LGBTQ history of Brooklyn, and is due out in March of 2019 from St. Martin’s Press. He is the Founder of the Pop-Up Museum of Queer History and sits on the Boards of QED: A Journal in LGBTQ Worldmaking, and the Museum of Transgender History and Art. His writing has appeared in The New York Times, Tin House, Buzzfeed, the LA Review of Books, Out, and many other venues. He is the recipient of the 2016-2017 Martin Duberman Fellowship at the New York Public Library, a 2017 New York Foundation for the Arts Fellowship in Nonfiction Literature, and a 2018 residency at The Watermill Center.