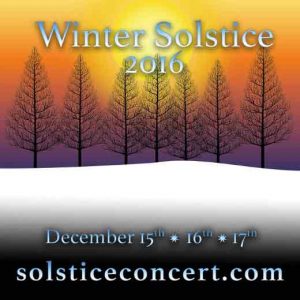 With Special Guest, Gary Brooker, The Voice Of Procol Harum

NEW YORK (Oct. 19, 2016) – The late Sir George Martin will be honored, and Gary Brooker, the “voice of Procol Harum,” will be special guest when the seven-time Grammy-winning Paul Winter Consort presents their 37th Annual Winter Solstice Celebration at New York’s Cathedral of St. John the Divine on December 15, 16, & 17, 2016. This year marks the first time the multi-media event will honor and feature artists from the classic rock realm.

The 2016 Solstice Celebration concerts will be dedicated to the late George Martin, renowned producer of the Beatles’ recordings. In addition to his work with the Beatles, George Martin also produced albums for Gary Brooker and the Paul Winter Consort, including the Consort’s landmark album Icarus, to which Martin later referred as “the finest record I have ever made.”

Featured guest Gary Brooker is the founder, pianist, and vocalist of the iconic band Procol Harum. He is the co-composer of the classic song “A Whiter Shade of Pale,” which swept the world in the late ’60s, has sold over 10 million copies, and is the most played song in the history of British radio. Brooker has been a friend of Paul Winter’s since the Paul Winter Consort opened for Procol Harum at Fillmore East in New York in 1971. Now, 45 years after their first meeting, the two bandleaders will once again share the stage, this time playing together in the glorious setting of the world’s largest cathedral.

Says Paul Winter, “I was a fan of Procol Harum in the ‘60s. It was the only rock band I liked besides the Beatles. As a life-long connoisseur of soulful ‘horns,’ I’ve long loved Gary’s voice, since first hearing him sing ‘A Whiter Shade of Pale’ all those years ago. This wedding of Gary’s bluesy voice with those Bachian changes embodies my favorite aesthetic combination of the earthy and the sublime.”

One of Paul Winter’s goals for the Solstice Celebration concerts is to provide a new musical adventure for each special guest while also encouraging them to perform their own music in a new context. Gary Brooker will sing Procol Harum classics, including “A Whiter Shade of Pale,” along with a number of surprises, accompanied by the musicians of the Paul Winter Consort.

Oboe virtuoso Paul McCandless will be featured soloist with the Consort, performing his composition “All the Mornings Bring” from the Icarus album, in tribute to George Martin. Martin was an oboe player before becoming a producer, and he always had great love for the instrument.

Also featured will be gospel singer Theresa Thomason, a beloved favorite of past Winter Solstice Celebrations.

The Paul Winter Consort will be joined once again by the 25 dancers and drummers of the Forces of Nature Dance Theatre, who will premiere a new piece for this year’s Winter Solstice Celebration, choreographed by their director Abdel Salaam.

Over the decades, the Winter Solstice Celebrations have become a forum for world music performers from countries around the globe, including Brazil, Russia, Zimbabwe, Ireland, Spain, Tibet, Mali, Puerto Rico, Tunisia, Ar – menia, and perhaps a dozen other cultures. Paul Winter explains his surprising choice to add England to the mix this year: “I would not have thought of England in the context of ‘world music,’ but my inspiration for saluting this music and these musicians from the rock realm came from the experience of attending the memorial service for Sir George Martin in London this past May. Gary Brooker and I went to lunch afterward and shared stories of our respective musical journeys through the years. I came home resonating with the memories of what a catalytic experience it had been working with George and how much that era had meant to me.”

For many in the NYC tri-state area, attending the Winter Solstice Celebration has become an annual tradition. People have traveled from throughout the United States and as far away as Argentina, Australia, Brazil, Canada, Denmark, France, Spain and Great Britain to attend the event, which really is pageantry at its best: a theatrical co-creation of music, art, and dance that inhabits the entirety of the Cathedral’s titanic space.

Manhattan’s Cathedral of St. John the Divine is more than a site of liturgy or dogma. It’s a home for the human spirit, meant to uplift, inspire awe, unite, and give refuge. It’s the perfect location for Paul Winter Consort’s ongoing exploration of the turning of the seasons and the tuning of the soul. The Winter Solstice Celebration is intended to give deeper festive meaning to the year’s end.

“Of course, this is a concert, a performance, but it’s also a way to make the transition from the old year to the new, to find a new evocation of the ancient rite of passage of our ancestors in the Northern Hemisphere,” says Winter. “The longest night of the year marks the moment despair can turn to joy. It’s a message we can all hear, that most likely we all need.”

General Admission tickets are available for $35 and $55. Reserved Seating is available for $95. To purchase tickets please visit stjohndivine.org or call (866) 811-4111.