“For those who love motion in dance, what a delight! The ballet innovates and entertains without turning its back on the story.” – Le Figaro Magazine

“The subtle and sharp writing gives depth to the drama and meaning to the dance. The choreography, with its beautifully inventive gestures has an exhilarating air of freedom.” – Danser Magazine 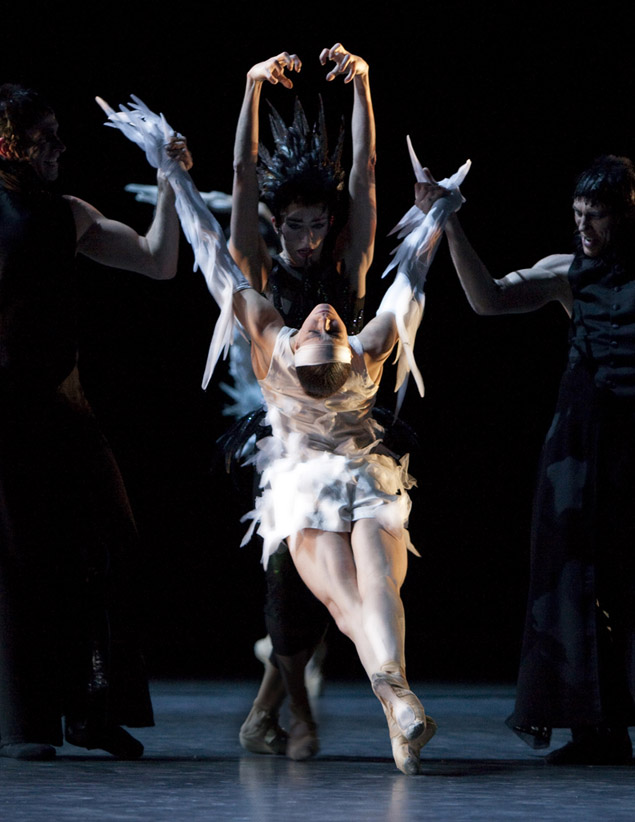 New York, NY, January6, , 2014– The Ballets de Monte-Carlo will celebrate Choreographer-Director Jean-Christophe Maillot’s 20th anniversary with the New York premiere of LAC (After Swan Lake), Maillot’s personal vision of Tchaikovsky’s masterwork, running for four performances at New York City Center, March 14 – 16, 2014. LAC will be presented by The Ballets De Monte-Carlo under the Presidency of H.R.H. the Princess of Hanover, in association with New York City Center and Ardani Artists. LAC (After Swan Lake) has scenery by visual artist Ernest Pignon-Ernest and costumes by Philippe Guillotel.

Jean-Christophe Maillot has re-worked Pyotr Ilyich Tchaikovsky’s pillar of the classic repertoire with the award-winning writer Jean Rouaud, bringing a modern-day relevance to the timeless story of Siegfried and Odette. The 2011 work explores the torments of our childhood fears and nightmares. Buried experiences and memories are resurrected against a Machiavellian, family backdrop to create a ballet of stark contrasts – good vs. evil, white vs. black, and purity vs. eroticism – questions that define us as human beings.

“LAC is a new version of the classical ballet, honoring the past, but with a slice contemporary codes,” said Jean-Christophe Maillot.” Today’s audiences can feel attached to the story Swan Lake, one of ballet’s most beautiful stories. It is a story of sensuality, about the ideal woman. The White Swan is the beautiful, pure woman every man falls in love with once in his life; the Black Swan represents sexuality, strength, power and control. We look forward to introducing New York to this new ballet that that showcases the dancers’ artistry with traditional and contemporary ballet styles,”

Ballet has had a strong presence in Monaco since Russian impresario Serge de Diaghilev presented his legendary ballet company, Ballets Russes, in 1909. H.R.H. the Princess of Hanover, wanting to maintain the tradition of dance in Monaco, formed The Ballet de Monte-Carlo in 1985, under the direction of Ghislaine Thesmar and Pierre Lacotte, followed by Jean-Yves Esquerre. In 1992, Jean-Christophe Maillot joined the company as artistic consultant and was promoted to the rank of Director-Choreographer in 1993. Today, the company consists of 50 dancers, and its repertoire includes works from the Ballets Russes and contemporary pieces from Jean-Christophe Maillot as well as acclaimed and emerging guest choreographers. The company has toured to France, the United States and China and will soon travel to the U.K. In 2011, dance in Monaco underwent a major and historical change when H.R.H. the Princess of Hanover combined The Ballets de Monte-Carlo company, the Monaco Dance Forum and the Princess Grace Academy into a single organization. Jean-Christophe Maillot was appointed head of this company, which now unites the excellence of an international company, the benefits of a multi-format festival and the potential of a high-level school.

Born in 1960, Jean-Christophe Maillot studied dance and piano at the Conservatoire National de Région de Tours. He won the Prix de Lausanne in 1977 and went on to dance principal roles as a soloist at the Hamburg Ballet for five years. An accident brought his dancing career to an abrupt end. In 1983, he was appointed choreographer and director of the Ballet du Grand Théâtre de Tours, which later became a National Centre of Choreography. In 1987 he became The Ballets de Monte-Carlo’s Artistic Advisor for the 1992-1993 season and was appointed Director-Choreographer by H.R.H. the Princess of Hanover in September 1993. His arrival set the company on a new path that quickly developed the level of maturity and excellence for which this company is renowned. He has created almost 30 ballets for the company, some of which have forged the reputation of The Ballets de Monte-Carlo across the world. Several of these works are now included in the repertoires of major international ballet companies. Maillot is known for his spirit of openness and his commitment to inviting choreographers with a different style to create for the company.

In 2000 he created the Monaco Dance Forum, an international showcase for dance. In 2009, he developed the content and coordinated the Centenary of the Ballets Russes in Monaco, which featured over 50 companies and choreographers. In 2011, H.R.H. the Princess of Hanover appointed Maillot head of The Ballets de Monte-Carlo, a new organization uniting the Ballets de Monte Carlo Company, the Monaco Dance Forum and the Princess Grace Academy under a single organization.