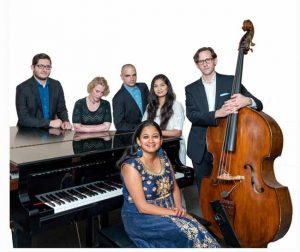 The New American Songbook and Sufi Jazz at Carnegie Hall

Book of Ragas: Indian Jazz and the New American Songbook

Charu Suri, an award-winning pianist, and her jazz band presents an evening devoted to Sufi and fresh sounds in jazz on Dec. 20th at Weill Recital Hall, Carnegie Hall. Suri’s performance and compositions have been praised by six-time Grammy award winning pianist, Arturo O’Farrill for their singular beauty. She will be joined by her band and two singers who will perform “The Book of Ragas” and “The New American Songbook.” Tickets are $50-$65.