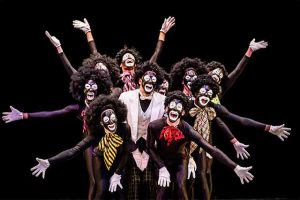 New York, NY, September 11, 2015 –NYU Skirball Center for the Performing Arts will present the NY premiere of The Minstrel Show Revisited, a reworking of the Tony-nominated Donald Byrd’s 1991 Bessie Award-winning theatrical satire, a funny, provocative look at the derogatory song and dance tradition of minstrelsy and illuminates the lingering scars of racial, religious and sexual bigotry.  There will be a free a post-show discussion and Q&A with artists from Spectrum Dance Theater after each performance.

“The black-faced mask of minstrel shows is a lingering image from America’s past that still inflicts wounds today through its psychic hold,” said Donald Byrd. “In the future if we are to be free from its terrible grip we must confront it boldly and courageously by staring back into its face and laughing at the absurdity of its representation until it no longer has the power to hurt us.  Only then will it be vanquished and we are free to be.”

The Minstrel Show Revisited ignites audiences with remarkable, razor-sharp choreography while engaging them in a parody of the infamous minstrel shows of a century ago. While the racially motivated slaying of Yusef Hawkins was the original impetus for the creation of the piece, Eric Garner’s choke-hold death, the Ferguson shooting of Michael Brown and the Trayvon Martin slaying has been the impetus for revising it. With traditional music and popular music from the period by Scott Joplin and Stephen Foster, The Minstrel Show Revisited will also feature original music from Mio Morales.

Donald Byrd, the enfant terrible of the New York dance scene of the 1980s and 90s, achieved international visibility for the creation of the Harlem Nutcracker and was nominated for a Tony Award for his choreography for the Broadway production of The Color Purple. Byrd’s body of work is varied and impressive, spanning more than four decades, pushing the boundaries of movement and message. The work may be purely an aesthetic experience or it may wrap itself around a compelling civic issue, encouraging a community to examine ideas and attitudes that it may impact.

Spectrum Dance Theater (SDT) was founded in Seattle in 1982 to bring dance of the highest merit to a diverse audience composed of people from different social, cultural, ethnic and economic backgrounds. Under the artistic leadership of Donald Byrd since 2002, Spectrum Dance Theater has become the preeminent modern dance company of the Pacific Northwest. SDT’s principal objective is to make the art form of dance accessible through contemporary dance performances and high-quality dance training in a variety of dance styles. Under Donald Byrd’s visionary artistic leadership, the organization has embarked on an exhilarating transformation that has attracted world-class dancers, produced some of the most avant-garde works in contemporary dance, and generated local and national praise. www.spectrumdance.org

NYU Skirball Center for the Performing Arts is the premier venue for the presentation of cultural and performing arts events for New York University and lower Manhattan. Led by Executive Director Michael Harrington, the NYU Skirball mission is to showcase and support diverse and eclectic talent from around the world, while cultivating audiences for live performance through deeper engagement opportunities. For more information visit: www.nyuskirball.org.