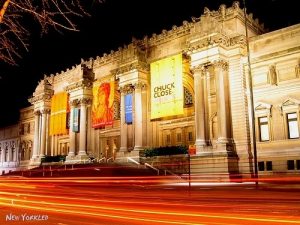 West-facing facade of The Met, near the Obelisk inside Central Park (basically, behind the museum)

The following information comes courtesy of their latest newsletter:

The Met will present an outdoor film series over three weekends in October organized in connection with the major exhibition Surrealism Beyond Borders. The series of films from the Pacific, Latin America, and Central and Eastern Europe will be presented on Friday and Saturday evenings—with each weekend focusing on a different geographic region—on the west-facing facade of The Met, near the Obelisk inside Central Park. The films will be accessible to the public and presented from 7-9 pm on October 8 and 9, October 15 and 16, and October 22 and 23 (rain dates October 29 and 30).

This series is part of The Met’s ongoing activation of the Museum’s exterior, which launched in 2019 with the annual Facade Commission. The October film series follows the projection of James Nares’s film Street onto the exterior wall in 2020.

The films will explore the collective concerns that animated Surrealism, as well as the historical and national distinctions that characterized regional cinema. It will extend the exhibition’s reconsideration of Surrealism across boundaries of geography and chronology, recasting appreciation of this revolutionary, emancipatory, and globe-spanning idea. The film program has been curated by Stephanie D’Alessandro, Leonard A. Lauder Curator of Modern Art and Senior Research Coordinator in Modern and Contemporary Art and Lauren Rosati, Assistant Curator, Leonard A. Lauder Research Center for Modern Art, both at The Met.

The film series is made possible by the Director’s Fund.