The Met: Live In HD Presents

Verdi’s Falstaff On The Big Screen

In A Production By Robert Carsen 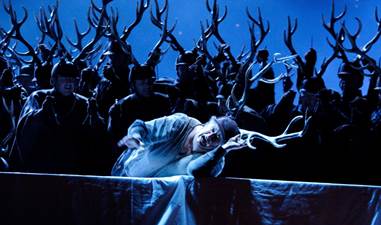 New York, NY (November 19, 2013) – The Met: Live in HD series continues on the big screen with Verdi’s Falstaff. An undisputed master of this work, Music Director James Levine conducts Verdi’s opera for the first time at the Met since 2005. Robert Carsen’s production—the first new Met Falstaff since 1964—is set in the English countryside in the mid-20th century. Ambrogio Maestri sings the title role of the blustery Sir John Falstaff, opposite a marvelous ensemble that includes Angela Meade, Stephanie Blythe, Lisette Oropesa and Franco Vassallo. The live transmission begins on December 14 at 12:55 PM ET with an encore on December 18 at 6:30 PM local time.

A sneak peak of James Levine rehearsing Falstaff can be found here.

This season, The Met: Live in HD series will reach an audience of approximately 3 million people across 1,900 theaters in 64 countries, and offers subtitles in nine languages, including Swedish for the first time. The 2013-2014 HD season continues with 6 other live transmissions. For complete information on locations and tickets, visit www.metopera.org/hdlive.

Showing at the following locations: