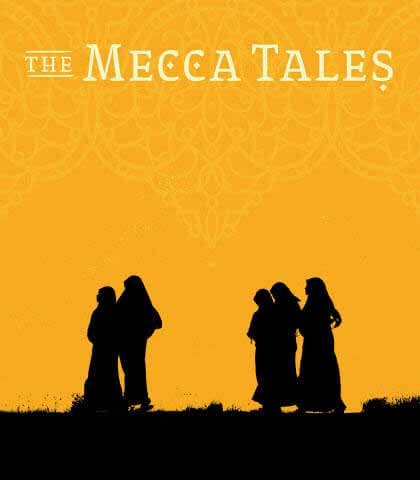 Voyage Theater Company and Crossroads Theatre Company will present the New York Premiere of Rohina Malik’s THE MECCA TALES, directed by Kareem Fahmy (3/Fifths at 3LD; This Time with Rising Circle Theater Collective), at The Sheen Center for Thought & Culture (18 Bleecker Street at the corner of Elizabeth Street), October 20-November 4 with evening performances on Mondays, Wednesdays, Thursdays, Fridays, and Saturdays at 7pm and matinee performances on Saturdays and Sundays at 3pm (no Saturday matinee on October 21). Tickets ($18 general admission/$15 students & seniors) are available at https://sheencenter.org/shows/mecca/ or by calling 866-811-4111. The performance will run approximately 90 minutes, with no intermission.

The cast will feature Cynthia Bastidas (She She She at The New Ohio), Kimberly S. Fairbanks (I Will Speak for Myself at 59E59; 10 Imaginings of Sarah & Hagar with Mint Theatre), Mariam Habib (Five Historic Children Who Are Not with Target Margin), Gulshan Mia (Acquittal with Pan Asian Rep), Jade Radford (Orange is the New Black on Netflix), and Louis Sallan (The Strangest at NYTW; Drunk Shakespeare). The creative team will include Scenic Design by David Esler (This Time with Rising Circle; Rogerandtom at HERE), Costume Design by Teresa Snider-Stein (The Crusade of Connor Stephens at the Jerry Orbach Theater), Lighting Design by Devorah Kengmana (Beyond the Oak Trees with Crossroads Theatre), and Sound Design by Fan Zhang (A Footnote in History at The New Ohio) with Dramaturg Salma Zohdi (Arab Classic Plays at the Segal Center), Choreographer Theara J. Ward (Dance Theatre of Harlem), and Production Stage Manager Keri Landeiro.

THE MECCA TALES tells the story of five Muslim women on the pilgrimage known as the Hajj. When their bus breaks down miles short of their destination, tempers flare and the women are tested in unexpected ways. They share their personal stories with each other in an attempt to move forward in their lives and find meaning in a spiritual journey seemingly gone awry.

THE MECCA TALES had its World Premiere at Chicago Dramatists in March 2015 and was nominated for a Joseph Jefferson Award for Best New Play.

VOYAGE THEATER COMPANY presents new and unheralded plays and playwrights from around the world, creating opportunities for collaboration between theater-makers of diverse cultures and disciplines. We serve our local community in New York City through professional productions, educational programming, internships, and discounted tickets for students and seniors. We present plays in multiple languages, and work in partnership with other non-profit organizations to broaden perspectives and build greater cultural equity across communities. http://voyagetheatercompany.org/

CROSSROADS THEATRE COMPANY is dedicated to creating and producing professional theatre of the highest standards of artistic excellence that celebrates the culture, history, spirit and voices of the entire African Diaspora. Since 1978, the Crossroads Theatre Company has been a leading force contributing to the canon of works that epitomizes our mission. Over the last four decades, Crossroads has presented close to 50 new plays that present an authentic and honest portrayal of Black culture including The Colored Museum,Black Eagles, Sheila’s Day, Fly and most recently Repairing A Nation which was filmed for television by WNET/Channel 13. In addition, several major theater artists have their indelible imprint on our stage including George C. Wolfe, August Wilson, Ntozake Shange, Bill Cosby, Richard Wesley, Avery Brooks, Ossie Davis, Ruby Dee, Walter Mosley, and Viola Davis, among many others. In 1999, Crossroads received the distinguished honor of receiving the Tony Award for Outstanding Regional Theater. Since 2007, Crossroads has been under the executive and artistic leadership of Marshall Jones, III. www.crossroadstheatrecompany.org

THE SHEEN CENTER FOR THOUGHT & CULTURE is a forum to showcase works highlighting the true, the good, and the beautiful. Located downtown on historic Bleecker Street, the Sheen Center is a vibrant new arts organization that focuses on theater, music, film, and talk. A project of the Archdiocese of New York, the state-of-the-art complex encompasses the 270-seat Loreto Theater, equipped with five-camera high-definition livestream capability and a multi-track recording studio; the 80-seat Black Box Theater; four rehearsal studios; and an art gallery. It was named after the late Archbishop Fulton J. Sheen, best known for his popular, inspirational radio and TV ministry in the 1950s and 60s. www.sheencenter.org