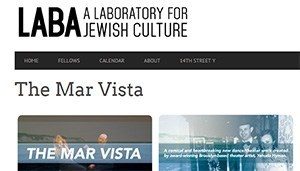 THE MAR VISTA is a fractured memoir about an American Jewish family. Taking place over a span of almost 100 years, THE MAR VISTA weaves together dance, gesture, spoken word, improvisation and ritual to tell a comical/tragical fragmented narrative about Hyman’s parents.

“Mar Vista” is Spanish for “view of the sea.” It is also the name of the Los Angeles neighborhood where Hyman grew up, a working class area on the Westside that had a high population of World War II and Korean War veterans and their families, many of whom bought their homes with the help of GI loans. The neighborhood’s name held within it a promise of views of the Pacific Ocean for all.  Unfortunately, the Hyman’s small house was at the bottom of a big hill, which blocked his family’s view. In this lyrical and quirky new work, Hyman attempts to climb that hill and witness the sea below.