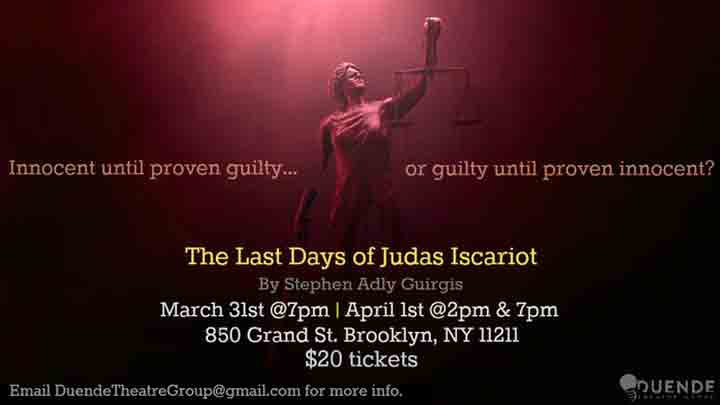 The Last Days of Judas Iscariot

The Last Days of Judas Iscariot is a hilarious, poignant, thought-provoking work by Pulitzer-prize winning playwright Stephen Adly Guirgis. Boasting a large, zany cast of characters, the play asks one of the most plaguing questions in the Christian ideology:

What happened to Judas Iscariot?

The facts (we think!) we know are these: Judas was the disciple of Jesus who betrayed his friend and teacher to the authorities. He is seen as the man responsible for Jesuss death; afterwards, Judas fell into despair and hung himself from an olive tree; since then, he has been suffering for his deeds deep in Hell, and will continue to do so for all eternity. Is that really fair?

Was Judas the duplicitous master of his own fate, a much-suffering pawn used for Jesuss ends, or just a man who made a mistake? Set in a courtroom in Purgatory, The Last Days puts Judas case to a hilarious, riotous, piercing trial, the results of which are sure to make the inhabitants of Heaven, Hell, and Purgatory and the audience reconsider what each thought they knew about forgiveness, faith, and the human inside one of the historys most infamous figures.