THE IMPOSSIBLE EXILE: STEFAN ZWEIG AT THE END OF THE WORLD 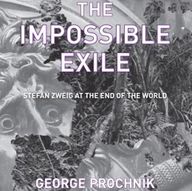 As part of the Literary Mews – a festival within the PEN World Voices Festival – Deutsches Haus at NYU presents a discussion of  The Impossible Exile: Stefan Zweig at the End of the World with the author George Prochnik, the book critic, Ruth Franklin, and moderation by Professor Eric Jarosinski.

Recently, Wes Anderson acknowledged the debt his film Grand Budapest Hotel owed to the Austrian writer Stefan Zweig, and revived the interest of a vast U.S. audience in the author’s work. In the 1930’s Stefan Zweig was a shooting star in Europe, and the most widely translated living author in the world. His novels, short stories, and biographies were so compelling that they became instant best sellers. Zweig was an intellectual and a lover of all the arts, high and low. Yet after Hitler’s rise to power, this celebrated writer who had dedicated so much energy to promoting international humanism plummeted, in a matter of a few years, into an increasingly isolated exile—from London to Bath to New York City, then Ossining, Rio, and finally Petrópolis, Brazil—where, in 1942, in a cramped bungalow, he killed himself.

George Prochnik’s The Impossible Exile tells the tragic story of Zweig’s extraordinary rise and fall while it also depicts, the gulf between the world of ideas in Europe and in America, and the consuming struggle of those forced to forsake one for the other. It also reveals how Zweig embodied, through his work, thoughts, and behavior, the end of an era—the implosion of Europe as an ideal of Western civilization.