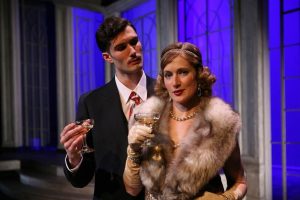 Brooklyn Center for the Performing Arts at Brooklyn College continues its 60th Anniversary Season with Montana Repertory Theatre’s new theatrical adaptation of The Great Gatsby on Sunday, April 12, 2015 at 3pm. F. Scott Fitzgerald’s captivating story of romance and betrayal is brought to life in Simon Levy’s finely crafted adaptation for the stage. Tickets are $30 and can be purchased at BrooklynCenter.org or by calling the box office at 718-951-4500 (Tue-Sat, 1pm-6pm)

Simon Levy, whose works also include stage adaptations of Tender Is the Night and The Last Tycoon, captures the power of Fitzgerald’s narrative and the sheer beauty of his prose in this haunting and heartfelt snapshot of the Roaring Twenties, vividly depicting the rise and fall of the notorious Jay Gatsby and the alluring and dangerous Daisy Buchanan. Much more than simply a story of lost love, The Great Gatsby recreates the Jazz Age world of youth, wealth, privilege, and reckless abandon.

In addition to the Fitzgerald Trilogy, Levy has written, directed, and produced numerous works, including his stage adaptation of Eliot Weinberger’s celebrated article, What I Heard about Iraq, which won the Fringe First Award at the Edinburgh Fringe Festival and the Fringe Award at the Adelaide Fringe Festival, and subsequently toured to 30 cities in the United Kingdom. He was recently honored with the Los Angeles Drama Critics Circle Milton Katselas Lifetime Achievement Award in Directing.

Greg Johnson, the artistic director of Montana Rep since 1990, directs the production. From Neil Simon and Gene Saks to Hugh Leonard, Elizabeth Ashley, Beth Henley, Christine Baranski, Andie MacDowell, Barnard Hughes, and Melvin Bernhardt, Johnson has been privileged to work with the finest. Johnson’s Broadway credits include Biloxi Blues, Crimes of the Heart, Is There Life After High School?, Da, and Hide and Seek. National tours include the Broadway productions of Steel Magnolias, Crimes of the Heart, and Biloxi Blues.