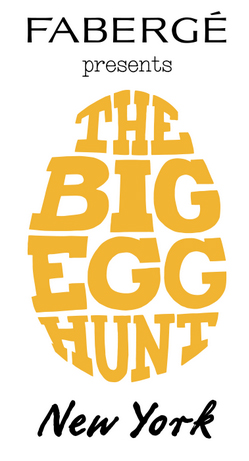 This spring, New York City will play host to the world’s biggest egg hunt. Over 200 egg sculptures, each individually created by the world’s leading artists, designers and creatives, will be displayed across the city for three exhilarating weeks.

Headline sponsored by Fabergé, the event is 100% charitable, raising money for children in New York City through Studio in a School, and conservation efforts through Elephant Family, saving the endangered Asian elephant and its habitat.

Designed by the likes of Diane von Furstenberg, Ronnie Wood, Marc Quinn, Bruce Weber, Zaha Hadid, Peter Beard, Carolina Herrera, Jacques Torres and William Wegman, the eggs will be ‘hidden’ in public places across all five boroughs, with a magical fairy tale taking hunters on a journey to find them.

In partnership with Sotheby’s, the highly collectable sculptures are auctioned at the end of the event, raising substantial funds for economically disadvantaged children and critically endangered wildlife.

Studio in a School (www.studioinaschool.org) is one of New York’s most respected children’s non-profits, bringing visual arts and professional artists to more than 150 New York public schools each year. The event will equally benefit Elephant Family (www.elephantfamily.org) as they continue to race against the clock to save the endangered Asian elephant from extinction.