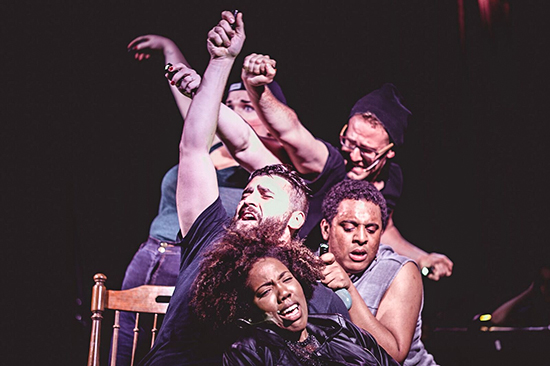 the New York Premiere of

Smugbug Productions presents the New York Premiere of The Eleventh Hour!, a new rock musical comedy by David Seamon running through June 27, 2018 at Town Stages, 221 West Broadway, NYC. Tickets are $35 and are available at https://www.eleventhhourmusical.com/performance-tickets/the-eleventh-hour.

It’s the end of the world in New Jersey! A burnout basement rocker and his ex-girlfriend, a rising star astrophysicist, may have the key to surviving the black hole bearing down on earth. If they can reconcile their feelings and manage a dangerous journey on the NJ Turnpike, they just may save their music, each other, and the mole people who live beneath them.

The Eleventh Hour! features music, book, and lyrics by David Seamon, direction by Annie Rutherford Lutz, and is produced by Smugbug Productions. The story for the musical was originally created by Seamon, Lutz, and Shimmy Schwartz through a commission by coLAB Arts.

David Seamon (Composer/Book/Lyrics) is a playwright, composer, and actor. He works as a teaching artist for the George Street Playhouse and McCarter Theatre and is the co-director of the company ensemble at the Wharton Institute of Performing Arts. In 2013, David won the Silver Tripod Award at Campus Movie Fest for best score to a short film, Melody.  David has an extensive background as a musical director and touring children’s theater performer, and has a degree in journalism and media studies from Rutgers University.  His 2007 album “The Brotherhood of Teenage Haze” is available on iTunes and Spotify and his 2017 release “Minimum Rage” is available on Soundcloud. David  is a frequent collaborator with coLAB Arts, having worked as an actor, composer, and playwright. The Eleventh Hour is David’s first full-length musical. Thedaveseamon.com

Annie Rutherford Lutz (Director) is a Director, Performer, and Teaching Artist Throughout the school year, she leads Theater Arts Integration programs across the state of New Jersey, specializing in the creation of new works and ensemble-based theatre. Most recently, she became the Resident Teaching Artist / Project Coordinator for George Street Playhouse, where she has the privilege of managing in-school theatrical residencies and fostering new Teaching Artists. Annie has been the Director of The Eleventh Hour since its inception and is honored to have followed this piece throughout its development. Annie is a proud graduate of Douglass College at Rutgers University.

Tam Justin Garcia is an NJ-based Singer-Songwriter. He has been performing since he was fourteen years old at coffee houses, busking train stations and city streets, festivals, benefit concerts to help the community, and large concert venues. This past October, Tam made his theatre debut as the lead role as Jon in Rooftop Theatre Collaborative’s production of Tick, Tick…Boom. He was the lead vocalist, guitarist, and principal songwriter for Garden State Line, who were nominated for Best Rock Band by the Asbury Park Music Awards in 2014 and 2015, and was the House Band for the Stone Pony in Asbury Park for 4 years. He has also toured the USA and has performed in Europe. He is currently working on his first solo record.

Rachelle Legrand was last seen in George Street Playhouse’s education tour in their productions of New Kid, Austin the Unstoppable, and the world premiere of Anytown. Some of her most memorable roles are Lorraine Hansberry (To Be Young Gifted and Black), Dionne (Hair), Wendy-Jo (Footloose), Sister Chantelle (Bare:A Pop Opera), and Crystal (Little Shop of Horrors). She is a proud graduate of Rutgers University. She would like to thank the entire production’s staff and cast of The Eleventh Hour for this experience, and her family and friends for their continuous support.

Kara Willow is so excited to be working with such a creative and talented team and cast. Previous roles include Queenie (Wild Party), Judy (9 to 5), Logainne (…Spelling Bee), and Carla (Nine).

Christopher Pasi makes his acting debut in New York! after being a part of the original production of The Eleventh Hour! in coLAB Arts’ 48 Hour Musicals. It has been an apocalyptically wonderful experience seeing this show explode into the masterpiece it has become.

Joshuah D. Simpson makes his New York stage debut with The Eleventh Hour. Joshuah is a performer, creator, and educator who recently relocated to the city after just having graduated from the University of the Arts in Philadelphia and the Eugene O’Neill Theater Center. If you want to follow Joshuah and their New York journey they can be found on twitter and instagram @JoshuahDSimpson. Some of their previous credits include; Shrek in Shrek the Musical (Sing for America), Horton the Elephant in Seussical the Musical (Milbrook Playhouse), and the featured performer in the original solo show It Takes One (Philly Fringe). They would like to thank their friends, family, and mentors for the overwhelming support over the years, moreover, the last few months. The amount of talent pouring out of this cast is wild, and they are truly stoked to get to be part of such a gut busting show. They would like to thank you all for supporting the arts and hope you enjoy the chaos of this show as much as they do.

Brianne Wylie makes her debut in NYC with this unique show. Brianne is a Seattle native/NYC transplant who recently graduated from Ithaca College with a BFA in Musical Theater. Favorite previous roles include Rose (Dogfight, Ithaca College) and Martha (Spring Awakening, Balagan Theater).

Smugbug Productions chooses projects that are challenging, stimulating, and reinvent audience engagement. We engage with work on all levels of creation and presentation including stage direction, production management, producing, general management, and consulting. Our work includes projects in theater, dance, public art, video, and community engagement. Our experience spans from shoe-string to multi-million dollar budgets.

Town Stages (Robin Sokoloff, Executive Director) is located in the heart of Tribeca. TOWN is New York’s premier venue to celebrate, collaborate and put on a show.A new female-driven cultural arts institution, Town Stages is a state-of-the-art, flexible performance and event space that can support the entire lifecycle of New York’s hallmark industries. With a stunning 9,000 square foot storefront facility, TOWN provides world-class cultural experiences and opportunities for all: from civic to corporate, tech to theater.With a Mainstage, a Cabaret Lounge, a Gallery, and a multi-use event space with a capacity of 225, Town Stages offers much-needed space and production resources for businesses, arts organizations, and families. TOWN boasts ticketed performances and curated community programing, from performance art to dance to theatre, and is also available for fashion shows, film shoots, weddings, and beyond.  For more information, visit www.townstages.com.

Sokoloff Arts (501c3) is an emerging cultural institution providing inspired space, prospective, and opportunity for cutting edge events in all sectors of The Arts, Corporate, Civic, and Cultural life in New York City. Led by a team of women from diverse backgrounds and artistic expressions, Sokoloff Arts works to provide viable and safe space to congregate, strives to promote cross-cultural community engagement, and blends the arts and business to create sustainable solutions to social and financial inequalities. The organization assists young creators with not only space, but resource generation, production, and community. To address the overwhelming demand for hi-tech, flexible, and affordable performance and event space in New York City, Sokoloff Arts has just opened Town Stages in Tribeca. To learn more, visit sokoloffarts.org.