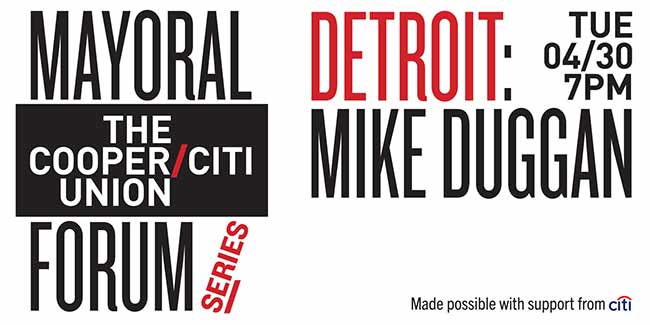 The event is free and open to the public. General public should reserve a space at http://bit.ly/DetroitCU. Please note seating is on a first come basis; an RSVP does not guarantee admission as we generally overbook to ensure a full house. Made possible with support from Citi.

With declining federal resources, aging infrastructure, and shifting economies, city leaders are activating all available assets, including grassroots organizations, non-profits, private philanthropists, and corporate leaders to initiate transformational progress. Nowhere is this more true than in Detroit, a city undergoing a near-complete metamorphosis.

While other cities are experiencing industry-related growth, Detroit’s growth is unique in that the change is driven and informed by the vision of a citizen-focused, inclusive city that is responsive to new, emerging, and nascent social, political, and economic needs. Mayor Mike Duggan has been at the helm of this transformation since taking office in 2013. Duggan has formed and relied upon expansive, cross-sector public-private partnerships. For example, the City of Detroit has partnered with the Kresge Foundation to promote and expand strategic transit-oriented development to increase long-term equitable opportunity, with Quicken Loans to spur homeownership and inclusive economic growth, and with local non-profit organizations like Osborn Neighborhood Alliance for social services. And don’t forget how art and music are also integral to a city’s growth.

Hear from Mayor Duggan about this work and more as part of the first program of The Cooper Union/Citi Mayoral Forum Series. Following his talk, Mayor Duggan will be joined by Rip Rapson, President and CEO, Kresge Foundation, Maurice Cox, Director of Planning and Development for the City of Detroit, and Juan Atkins, a Kresge Artist Fellow and a pioneer of Detroit techno, for a conversation about Detroit. Jennifer Bradley, Executive Director for the Center for Urban Innovation at the Aspen Institute, moderates.

Juan Atkins will also perform a set as part of the evening’s program.

Michael E. “Mike” Duggan is the 75th mayor of Detroit, Michigan – elected in 2013. He received 52% of the primary vote as a write-in candidate, then 55% of the vote in the mayoral run-off in November 2013. He ran for Mayor of Detroit on a platform of financial turnaround, crime reduction and economic development – believing that, “Every neighborhood has a future.”

Rip Rapson is president and CEO of The Kresge Foundation, a private, national foundation dedicated to expanding opportunities in America’s cities through grantmaking and social investing. He has led foundation to adopt an array of grantmaking and investing tools to improve the economic, social, cultural and environmental conditions of urban life through six defined programs: arts and culture, education, environment, health, human services and community development in Kresge’s hometown of Detroit.

An 1983 alumnus of The Irwin S. Chanin School of Architecture of The Cooper Union, Maurice Cox is the director of planning and development for the City of Detroit. Cox previously served as mayor of Charlottesville, Virginia; design director of the National Endowment of the Arts; and director of the Tulane City Center in New Orleans.

As an originator of techno music, Juan Atkins transformed electronic music and joined the ranks of Detroit’s musical legacy. In 1981, Atkins and Richard “3070” Davis co-founded the groundbreaking electro group Cybotron, which laid the foundation for Detroit techno. In 1985, Atkins founded his own label Metroplex Records and recorded his first single with his new group Model 500. Toward the end of the 1980s, techno music swept the planet with Atkins in high demand for live performances around the world.

Jennifer Bradley is the founding director of the Center for Urban Innovation where she has led projects on: how local-level regulations can help or hinder innovation and economic inclusion; how cities can prepare for the advent of autonomous vehicles; how inclusive innovation happens in businesses, philanthropies, local governments, and non-profits; and the challenges that women and people of color have in accessing capital.