Presents the US Premiere of

THE ROAD TO PROMISE

and Orchestra of St. Luke’s

The Road of Promise is a new concert adaptation of Kurt Weill and Franz Werfel’s epic 1937 stage spectacle, The Eternal Road, led by Tony Award-winning conductor/director Ted Sperling and featuring a cast of world-renowned singers and a 200-voice chorus and symphony orchestra. Like the original stage work, The Road of Promise combines a story about a synagogue under threat of persecution with defining stories from the Old Testament. As the congregation awaits their fate, a 13-year old boy appears who knows nothing of his Jewish heritage or faith. The Rabbi enlightens him and gives the community strength by recounting the stories of Abraham, Jacob, Joseph, Miriam, Moses, Ruth, Isaiah, and more, all of which come alive through Weill’s magnificent musical score. The young boy listens to the stories unfold and emerges as the new hope for his people. 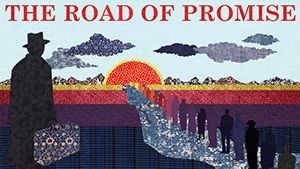