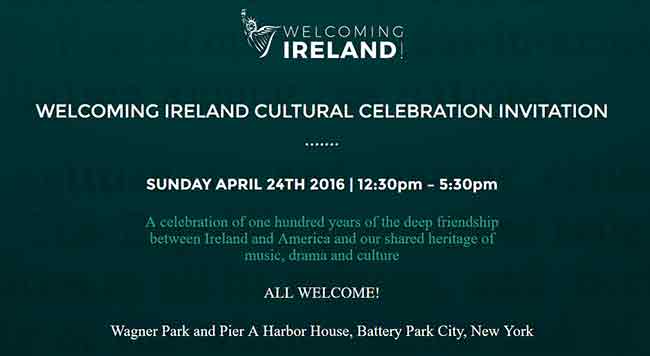 Learn more at the official page(s)…

The South Street Seaport Museum and the Consulate General of Ireland in New York announce The Centennial Commemoration of Easter Rising & Celebration of New York – Ireland Friendship on Sunday 24 April, 2016 from 11:00 am – 5:30 pm at Wagner Park and Pier A, Battery Park City, New York, NY. This will be an historic day for the Irish American community in this region, as we gather to mark the Centennial of Ireland’s Easter Rising of 1916. As part of the day, South Street Seaport Museum’s Schooner Lettie G. Howard in partnership with the youth development and cultural integration charity, Atlantic Youth Trust, will be docked alongside Pier A for the day. Lettie and her crew will be demonstrating some of the aspects involved in educational sail training, and providing the public with a clear picture of what the future has in store for the Atlantic Youth Trust.

An inspiring and inclusive day-long program of events have been organized to mark this Centennial. They will take place from 11:00 am – 5:30 pm in Wagner Park, Battery Park City – a location with deep historical resonance for the Irish American community, whose ancestors first arrived at this point following Ireland’s Great Hunger in the 19th Century.

The Government of Ireland and Irish Community Official Commemorative Ceremony will take place at 11:00 am. The Ceremony will involve the Reading of the Proclamation of the Irish Republic and the raising of the National Flags. New York and Irish political leaders will participate, as will the Irish Defense Forces and the 69th Infantry Regiment.

A star-studded music and cultural program entitled Welcoming Ireland! will follow immediately after the Ceremony at Wagner Park and the nearby Pier A. The very best of Irish music, dance, theatre, poetry and more will be on offer. All events at Pier A are free and open to the public on a first-come-first-served basis on the day. For more information, please visit www.Ireland2016NY.com.

The Centennial of Ireland’s Easter Rising of 1916 will have particular resonance in the United States of America. Five of the seven signatories of the Proclamation of the Irish Republic spent periods of time in the US, which greatly influenced their thinking and actions. The US is the only foreign country mentioned in the Proclamation; the US has the greatest concentration of Ireland’s Diaspora; and contemporary ties are of extraordinary depth and breadth.

The Atlantic Youth Trust is a youth development and cultural integration charity that will build a tall ship with the goal of bringing young people of Northern Ireland and the Republic of Ireland together on youth development voyages. The goals of this program-developing and promoting self-esteem, teamwork, leadership, and communication skills in young adults-are shared by the schooner Lettie G. Howard, a sail training vessel that has served New York City youth for over 20 years in this exact capacity.

ABOUT THE SCHOONER LETTIE G. HOWARD

The Lettie G. Howard is a National Historic Landmark schooner owned and operated by the South Street Seaport Museum. Built in 1893, Lettie was originally used as a commercial fishing vessel, and is now a fully restored US Coast Guard certified and inspected Sailing School Vessel. Program participants aboard Lettie learn many of the skills of a professional mariner all while exploring the natural environment of the sea through classes and activities. As a sailing school vessel, every participant aboard Lettie must actively take part in setting sail, standing watch, steering, navigating, and all other aspects of shipboard operation. The communal shipboard environment provides students with challenging lessons in teamwork, communication, respect and responsibility.