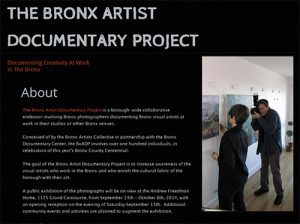 There is more than Graffitti Artists in the Bronx!

Daniel Hauben, www.danielhauben.com and Judith Lane www.judithclane.com 2 of the Bronx Artists that came up with the idea for the Bronx Artists Documentary Project, bringing 30 photographers to document 80 Artists, all from the Bronx.

They wanted to show how much art is being created in the Bronx by Bronx residents.

For the first time ever, visual artists who work in the Bronx are being documented in a series of photographs as part of the Bronx Artist Documentary Project.

Conceived of by a group of Bronx artists, and with photographic expertise and curatorial guidance provided by the Bronx Documentary Center, the Bronx Artist Documentary Project is a borough‐wide collaboration involving 110 visual artists who work in a variety of styles: from classical painters to graffiti artists, sculpture to printmaking, found object collage, textile arts and art dolls.

The Project has been designated an official Bronx Centennial Event, in celebration of the 100th anniversary of Bronx County.

In a juried process that began in 2013, 30 photographers were selected to photograph 80 visual artists at work in their Bronx studios or at other venues. An exhibition of this photographic series will be presented at the Andrew Freedman Home, 1125 Grand Concourse, Bronx, New York, from September 13 through October 8, 2014.

The Bronx Artist Documentary Project brings long‐deserved attention to wide variety of highly accomplished artists and photographers who find their inspiration in the Bronx, and to the power of art as a catalyst for change and positive growth in the urban environment.

The Bronx Artist Documentary Project is also fostering new connections between artists and photographers from City Island to Mott Haven, Spuyten Duyvil to Hunts Point, and Morris Heights to Arthur Avenue, across generations, backgrounds, and artistic practices, opening up new opportunities for collaboration and exchange within the artistic community at large.

More than just portraits, the photographs document the artists in the moment of creation, doing what they do best in whatever space or location they have found in which to do it. The result is an opportunity to witness the “unseen” artistic process and creative work that is at the very heart of the current cultural renaissance in the Bronx.

The exhibition will be enhanced by a series of public programs including artist talks, hands‐on demonstrations, and panel discussions to encourage greater appreciation and interaction between artists and the community. Following the exhibition, the photographs will be published in a fine art book that will provide an enduring record of the artistic community in the Bronx at this significant moment of dynamic transformation.