A Children’s Play For Christmas By August Strindberg 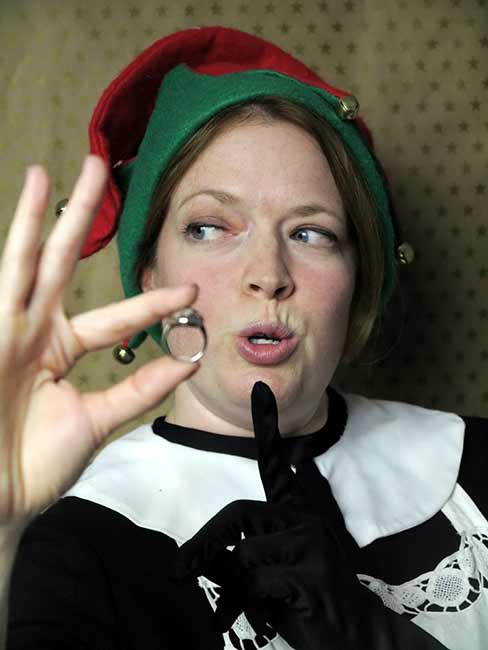 NEW YORK — Even people familiar with August Strindberg may be surprised to learn that he wrote plays for children.  The best example is “The Black Glove,” the fifth (and least performed) of his Chamber Plays.  Its place in history has been obscured by a historical fluke:  it premiered in 1911, after the close of Strindberg’s Intimate Theater, which it was written for.  This kept it out of many anthologies.  To share it with New York audiences–and especially New York kids–August Strindberg Rep will present it November 30 to December 16 at Gene Frankel Theatre, 24 Bond Street, in the New York premiere of a verse translation by Anne-Charlotte Hanes Harvey.  Director is Robert Greer, Artistic Director of the troupe.  The piece is recommended for audiences age 8 and up and special family plans are being offered.

In Strindberg’s lyrical fantasy, a lost black glove found in the entryway to a large apartment building the day before Christmas Eve mystically passes through the hands of many of its residents as it bestows a Christmas spirit.  The glove belongs to a young wife who has been mistreating her servants and who is known as “too rich for her own good.”  She has wrongly accused her maid of stealing the ring, but in actuality it is lodged in the glove.  Trouble is, there are only two characters who know this:  a Tomte (a mythological elf from Nordic folklore typically associated with the winter solstice and Christmas season) and the Christmas Angel.  The angel commands the Tomte to take away the young wife’s baby daughter in order to teach the wife a lesson about “what it feels like to lose something,” promising to restore the baby as a Christmas gift.  In the course of the play, the wife learns humility and discovers her lost father.

The play will be acted by a cast of six women, in the British Travesty tradition of the late 1800s (in which Sarah Bernhardt played Hamlet, etc.), in order to ensure that the play will be children-friendly.  The set will be minimal because the primary visuals are projected graphics by Donna Miskend, a children’s book illustrator.  The maid will be played by Crystal Edn.  An old professor and old woman are played by Mary Tierney.  Other casting is incomplete as of this writing. Costume design is by Janet Mervin.  Lighting design is by Gilbert Pearto.  Sound design is by Mark Bruckner.

Premium seating is offered for parents to sit in the first row and their children to sit on pillows in front of them.  The cost of these tickets is $49 for parent & child, $59 for one parent and two children, $69 for two parents and two children.  The package includes goodie bags for the children.  General admission is otherwise $29.

Strindberg wrote the playscript partly in verse (iambic unrhymed) mixed with prose sequences.  The translation by Anne-Charlotte Hanes Harvey renders his lyrical passages in English verse whenever practicable.  Strindberg often concludes a scene with rhymed couplets or four rhymed lines and this is followed in the transltion. Ms. Harvey’s translation has only been produced once to-date: by The August Strindberg Society of Los Angeles (TASSLA) at The Norwegian Seamen’s Church in San Pedro December 18-19, 2011.

Anne-Charlotte Hanes Harvey was born in Sweden, educated in Sweden and the U.S.  She is a Professor Emerita, School of Theatre, Television and Film, San Diego State University. After years as a theater educator and practitioner, specializing in translating and dramaturging the plays of Ibsen and Strindberg for productions ranging from academic theater to South Coast Rep in Costa Mesa to Broadway, she is now also writing plays.