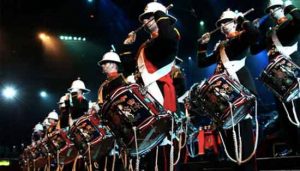 The Band of the Royal Marines and the Pipes, Drums, and Highland Dancers of the Scots Guards

The sounds of Scotland come marching into Lehman Center for the Performing Arts for a whirlwind performance of precision drills, haunting bagpipes and energetic Highland dancing. When not fulfilling their ceremonial duties, the Band of the Royal Marines and the Pipes and Drums of the Scots Guards tours the world, mesmerizing audiences with their rhythms and repertoire, which includes popular classics and contemporary works. Now you can marvel at the distinguished band’s grand display of pageantry and ancient military traditions at this awe-inspiring presentation.

The development of music in the Royal Marines is inextricably linked with the evolution of British military bands. Lively airs and the beat of the drum enabled columns of marching men to keep a regular step.

The drum was the normal method of giving signals on the battlefield or in camp. As long ago as the days of Drake and Hawkins the drummer’s rhythm would advertise the changing watches or beat the men to quarters.