The Architecture of Proximity

at the Theater at the 14th Street Y 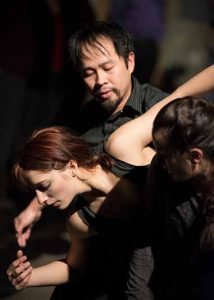 The Architecture of Proximity combines elements of post-modern dance, voguing, gestural, and impulse generated movement. It is an immersive dance work that explores the relationship between architectural spaces and their physical and psychological effects on the body. The work examines what happens when the proximity between audience and performer is erased and investigates how boundaries and borders define a sense of “ownership” of self and space. Zullo uses the collected essays in Space & Psyche, edited by Elizabeth Danze and Stephen Sonnenberg from the Center for American Architecture and Design at The University of Texas at Austin, to further consider how spaces effect the body both physically and psychologically. Composer David Engelhard creates an original and interactive sound score that responds to the performers’ choices.

The Architecture of Proximity was performed alongside Mana Hashimoto’s Stories of Blind-Light, Shadow and Wind on January 29, 2015 at FLICfest at the Irondale Center.

John J Zullo is originally from the Bronx, New York and currently resides in NYC. He graduated from American University in 1996 with a B.A. in Anthropology and 1999 with an M.A. in Dance. John danced with many artists while at American University. While there, he performed in a work by Ohad Naharin, presented his choreography at Dance Place in Washington, D.C. and was awarded the Arts Club of Washington’s Award for Outstanding Choreographer 1999.

In January 2010 Zullo/RawMovement began performing at various venues in NYC. Zullo/RawMovement was one of six artists selected for FLICfest 2015 at the Irondale Center in Fort Greene, Brooklyn. There they premiered The Architecture of Proximity, an evening length immersive work where the boundary between performer and spectator is erased. Zullo/ RawMovement presented the Memory Suite evening of works at the Dance Complex in Cambridge, Massachusetts in June 2014 where it was a Boston Globe pick of the week. Zullo/RawMovement presented its 2013 season at Danspace Project at St. Mark’s church as part of the Dance:Access series. The evening of works, the Memory Suite, included “this Exquisite diversion/mysterious Skin” (2013), “ALL what THIS do HAS you HAPPENED see? BEFORE” (2012), & project Xiii (2013). Zullo/RawMovement was presented for a sold out run at the LaMaMa Moves! Festival 2013 and invited to perform in the Dumbo Dance Festival 2013.

Zullo/RawMovement is exploring ideas and concepts from our cultural landscapes that are transformed into works that are expressive, imaginative and explosive. Zullo/RawMovement strives to create and share these dances in the hopes of eliciting an emotional response to a movement-based experience in both traditional and non-traditional performance settings and environments expanding the boundaries of where and how performances are experienced.