The Adventures of Harold and the Purple Crayon

A Target Storybook Series presentation for ages four and up 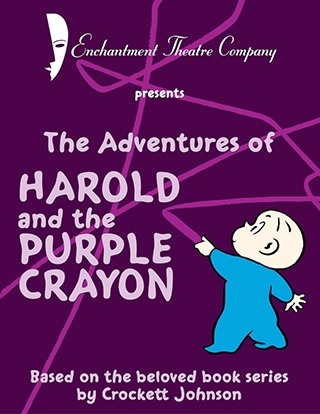 Brooklyn Center for the Performing Arts at Brooklyn College opens its Target Storybook Series with Enchantment Theatre Company’s The Adventures of Harold and the Purple Crayon, based on the beloved book series by Crockett Johnson, on Sunday, March 29, 2015 at 2pm. Tickets are $9 and can be purchased at BrooklynCenter.org or by calling the box office at 718-951-4500 (Tue-Sat, 1pm-6pm).

“One evening, after thinking it over for some time, Harold decided to go for a walk in the moonlight.” So begins Harold and the Purple Crayon, the first of seven delightful picture books by Crockett Johnson that follows the zany adventures of an inventive young boy. As it turned out, there wasn’t any moon that night nor was there a path to walk on, so Harold simply drew them. And thus his journey began. Resourceful and brave, Harold created the world he wanted to explore, using nothing more than a big purple crayon and his sky’s-the-limit imagination. Enchantment Theatre Company’s production will take you on a wild ride as Harold jets to Mars (shooting stars, spaceships!), joins a circus (he walks a tightrope!), and meets a king in an enchanted garden (of course, there’s a dragon).

The “Harold” books have captivated families for more than fifty years, celebrating the imaginations of children and the unique ways they see the world. Enchantment Theatre Company, a Philadelphia-based producer of original theater works for children and families, has adapted this wonderful story for the stage using each element of its signature style, combining life-size puppets, masks, magic, and music. Enchantment’s production will delight anyone whose heart is young and adventurous.