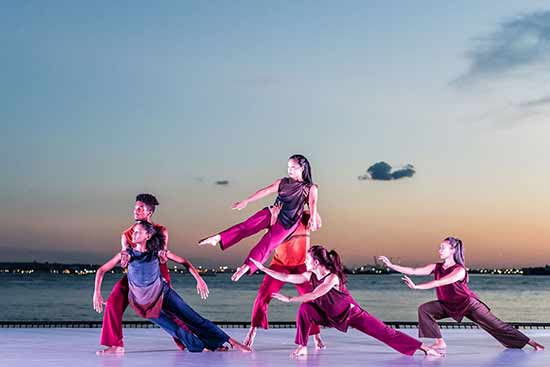 Battery Dance, in association with Battery Park City Authority, announces the 37th Annual Battery Dance Festival with performances from August 12-17, 2018 from 7pm to 9pm against the breathtaking backdrop of the New York Harbor at Robert F. Wagner Jr. Park in Battery Park City, culminating in a closing event and reception on August 18, 2018, from 6pm to 8pm at The Schimmel Center at Pace University.  For more information, visit http://batterydance.org/battery-dance-festival/.  Tickets for August 18 will be available beginning 8/1.

In addition to the live performances, there will be a screening of the film Moving Stories held in the Robert F. Wagner Jr. Park on Saturday, August 11, 2018 at 8pm. Moving Stories, which recently premiered at the MoMa Doc Fortnight Festival, follows Battery Dance’s dancers as they travel to India, Romania, Korea, and Iraq working with at-risk youth through the Dancing to Connect program. With just one week to teach the tools of choreography and collaboration to the youth in preparation for a final performance, the film captures the struggle, frustration, determination, and transformation of both students and teachers. Moving Stories is a film by Sundance Award-winning director Rob Fruchtman, writer-producer Cornelia Ravenal, filmmaker Mikael Södersten, and producer Wendy Sax.

The Battery Dance Festival provides a unique opportunity for both established and emerging dance companies to present original works of high artistic merit in a free public forum. BDF revels in the panoply of dance that our city offers, with strong emphasis on the inclusion of diverse dance styles and an international roster of performers. American choreographers such as Michelle Dorrance, Robert Battle, Jacqulyn Buglisi and Elisa Monte have all presented their works alongside pre-eminent companies from Asia, Europe, South America, Africa and the Caribbean.

“Having the opportunity to perform and teach around the world, it is only natural that we would bring back to our home in lower Manhattan the amazing treasures we discover overseas,” said Jonathan Hollander, artistic director of Battery Dance. “With countries from Africa, Asia, Europe, North America, and South America this summer, we will celebrate and explore vibrant forms of dance in a setting that represents New York’s history as a destination for immigrants.”

This year’s featured artists include the best of New York City as well as dancers from Botswana, Canada, Gabon, Kazakhstan, Macedonia, Spain, and a collection of India’s greatest Kathak dancers.

Support for the 2018 Battery Dance Festival