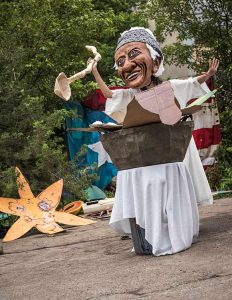 Southeast on 10th Street and Avenue D, south on Ave D towards 6th Street, west on 6th to Avenue C, right on Ave C, then north to 12th Street and ending at Festival’s Main Stage by 12:00pm.

As always, the festivities commence at 11 a.m. with a Community Parade featuring the work of Garbagia , an eco-urban recycled arts initiative that will work throughout the month at the Loisaida Center with local artists and residents to conduct art building workshops to create instruments, flower masks, ‘vejigantes,’ paper mache animal masks, and other props—with an emphasis on recycled and found materials.

Y No Había Luz will also perform as part of the 6th Annual Festival Theater Lab . The family-friendly event will move to the street-level this year as part of the festival’s street vendor fair along Avenue C or what is known as the Loisaida Commercial Corridor (E. 6th Street to E. 12th Street.). After the successful debut of their post-Hurricane play ¡Ay Maria! at last year’s Festival, Puerto Rican/Latin American theatre collective Mezcolanza will again host a series of one-act performances. Plenatoriom , a Puerto Rican plena initiative housed at Loisaida, and the improv comedy troupe Teatro 220 will also perform, followed by the closing Community Pageant.