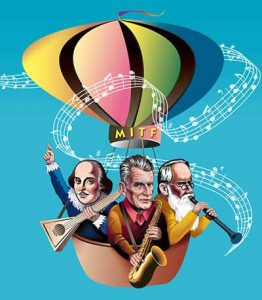 New York – Year 2015 is the sweet 16th year for the MITF. Prolific producer John Chatterton’s brainchild, The Midtown International Theatre Festival – presenting powerful plays and musicals from around the world – is steadily marching toward 20 years as one of the best reasons to come to New York in the summer. This year, the diverse Midtown International will present quality live theater PLUS a series of cutting-edge short works, children’s theater, dance productions, one-person shows, cabaret, vaudeville & burlesque style entertainment.

Productions come from as near as around the corner to as far as Australia. One of this year’s entries also serves as a fundraiser for Safe Horizon, Sexual Assault and Domestic Violence Crisis Center.

Here’s what to expect this summer from John Chatterton and the M*I*T*F:

AN EVENING OF NAUGHTY THOUGHTS written and directed by Luke Krueger; starring Paul Christiano and Christina Eltvedt. A dance/theatre mash-up of two one act plays. In one, Hilda interrogates her imaginary friend pancake, whom she believes is the source of her off-color jokes, and other darker thoughts. The second play stars Paul Christiano, Tarah Brown-Hartung, Paula Frasz and John Schmidtz. Based on Kate Chopin’s “The Story of an Hour,” Louise Mallard quietly celebrates her freedom in the wake of her husband’s death. Performance Dates: Thurs 7/30, 8:30pm; Sat 8/01, 7:00pm; Sun 8/02, 5:30pm

DEATH OF THE PERSIAN PRINCE written and directed by Dewey Moss; starring Pooya Mohseni, George Faya, and Gopal Divan. Death of the Persian Prince is a powerful new play that sheds light on the growing practice of gay Iranians being forced into sex changes in order to avoid legal execution. Having fled Iran and now living in New York City, Samantha is forced to deal with the consequences of her hidden past when she receives an unwelcome visit from her brother. Performance Dates: Thurs 7/23, 8:00pm; Sat 7/25, 5:30pm; Sun 7/26, 1:00pm

SINGLE LADIES by Paige Strothmann, directed by Paige Strothmann. This riotous show tells the tale of 5 women and their war stories from the battlefields of love and dating. Based on true experiences in online dating and other ill-advised attempts at finding love. Performance Dates: Tues 7/14, 8:30pm; Sun 7/19, 2:30pm; Thurs 7/23, 8:30pm

UNDER THE ONE-TIME SKY by Susan Jennifer Polese, directed by Leta Tremblay; starring Michelle Concha Herko and Adam La Faci. The sky is the same along with everything under it and there is only one thing Dwight knows for sure: there is no hiding in memory. UNDER THE ONE-TIME SKY is being performed as a fundraiser for Safe Horizon, Sexual Assault and Domestic Violence Crisis Center. Performance Dates: Fri 7/24, 7:00pm; Sat 7/25, 3:00pm; Sun 7/26, 5:30pm

GOOD CATCH COMEDY Good Catch is a musical improv team that takes a suggestion from the audience and creates a completely made-up musical narrative through original songs, scenes, and dances for a unique, fun, and one-of-a-kind performance! Sat 8/1, 3:00pm

ROBOCOP NYC’s high energy hip hop improv team! See what happens when the beat kicks in and we freestyle our way through our improv sets! Sat 7/18, 6:15pm

LATE NIGHT LIVE Late Night Live is a live comedy show hosted by comedians Mike Vincent and James “Murf” Murphy. The show will feature a night of stand-up comedy from some of New York’s most talented comedians and comedy writers, along with special guest interviews. This is a show you don’t want to miss! Sat 7/18, 9:15pm

LENALENALENA! Lena Moy-Borgen brings you the story of a Chinese Jew from Oakland, California with the soul of a chorus girl crossed with Mel Brooks’ sense of humor. Expect show tunes, stories and lots of fun with Katy Pfaffl at the piano. Sat 7/18, 7:15pm

The Byron Freeman Experience LIVE! Covers of all kinds of your favorite music from the best R&B to the most popular songs off of the radio to the greatest show tunes that ever hit the Broadway stage. Come out, have some fun and enjoy some great singing! Tue 7/28, 7:30pm