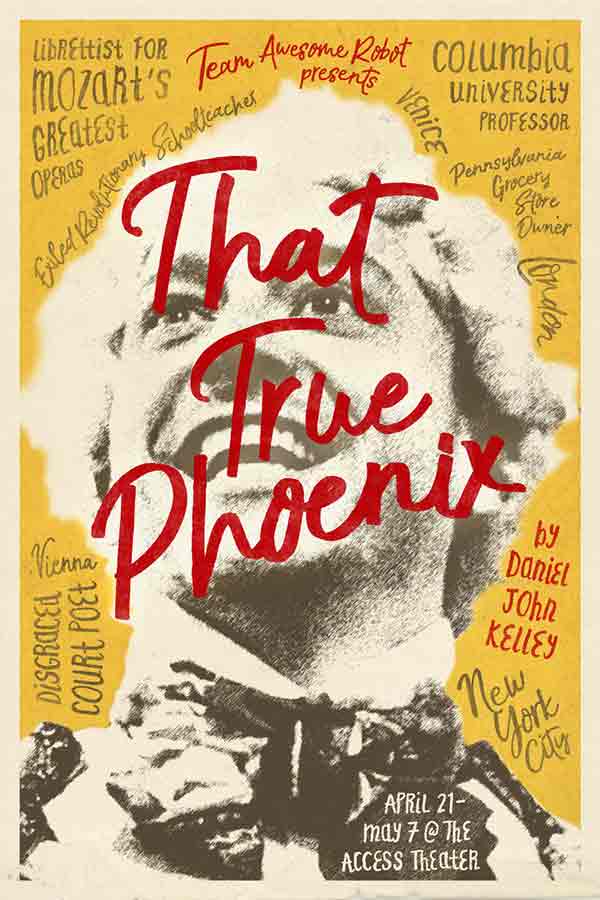 Team Awesome Robot (Producers Christopher Diercksen and Yvonne Hartung, Assistant Producer Natalia Lopresti) will present the World Premiere of Daniel John Kelley’s That True Phoenix, directed by Christopher Diercksen (Assistant Director, Brittany Ayers), April 21-May 7 at the Access Theater (380 Broadway between White and Walker Streets, 4th floor) with performances on Friday, April 21, Saturday, April 22, Thursday, April 27, Friday, April 28, Saturday, April 29, Wednesday, May 3, Thursday, May 4, Friday, May 5, and Saturday, May 6 at 8pm, Sunday, April 23, April 30, and May 7 at 2pm. Tickets ($20) may be purchased in advance at http://thattruephoenix.brownpapertickets.com/ or by calling 1-800-838-3006.

That True Phoenix is the story of Lorenzo Da Ponte: the most interesting man you’ve never heard of. Far more than just the Librettist for Mozart’s greatest Operas, Da Ponte still ended up as a mere footnote in history. Based on his own highly embellished memoirs, That True Phoenix chronicles Da Ponte’s life from exiled revolutionary schoolteacher in Venice, to disgraced court poet in Vienna, to Pennsylvania grocery story owner, to Columbia University Professor in New York City and tells the true story of a perpetual immigrant who changed his story to become the true embodiment of the American Dream.

That True Phoenix is Team Awesome Robot’s long-term script development project with playwright, Daniel John Kelley. Their upcoming production will be the culmination of a year of investigation into the improbable life of Lorenzo Da Ponte.