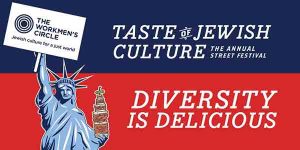 The Taste of Jewish Culture Annual Street Festival is a signature event that brings together thousands of foodies and dozens of purveyors of delicious food for a day of eating, learning, and celebrating in New York. The festival features dozens of diverse food vendors, music, engaging activities for kids, and much more!

The following is from last year’s posting so’s to help give you an idea as to what to expect: