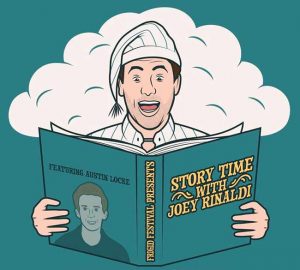 Story Time with Joey Rinaldi at Under St. Marks

1 Comedian. 5 Shows. 24 years of stories. FRIGID Festival presents “Story Time with Joey Rinaldi ” February 28-March 8 at Under St. Marks. Known for his long-form comedic narratives, Joey Rinaldi’s new one-man show offers audiences a glimpse into his endearingly cringey adolescence. From accidental incest to a brief period of illiteracy, each story captures the difficulty of growing up and that for some, it’s worse than others.

Says Rinaldi, “I wanted to give audiences the chance to forget their own childhood traumas and focus on mine. I mean, what connects us better than collective misery? I want people to leave feeling exponentially better about their own upbringing.”

This unapologetic performance hopes to boost the audience’s self-esteem better than any therapy session. Relatable and endearing, Rinaldi’s comedy will warm your heart while simultaneously giving you secondhand embarrassment with stories that will make you say, “Thank God that didn’t happen to me.”

BIO – Connecticut native Joey Rinaldi discovered his passion for stand-up at the age of 20 after transferring to NYU. He found his niche in long-form personal narratives in 2017 after performing his first one-man show, “Potty Training” at The PIT, followed by his second solo act in 2019, “Picture Everybody Naked” at The Kraine. Since then, his comedy has taken him across North America, as well across the pond to the UK and Australia. Rinaldi has been featured in the Connecticut Comedy Festival, Burbank Comedy Festival, the Finger Lakes Comedy Festival. This August, Rinaldi debuts the show at the Edinburgh Festival Fringe. Rinaldi also serves as creator of the Youtube comedy sketch channel Dirty Laundry Videos, where he and fellow comedians gift viewers with a new sketch every Sunday. Rinaldi also acts as co-creator and host of the popular underground pop-up comedy show “The Manifest Show.”