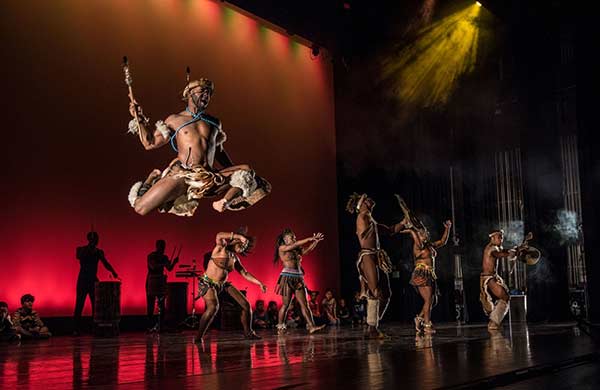 Brooklyn Center for the Performing Arts at Brooklyn College concludes its 2017-18 Kumble Theater season with the much-anticipated return of Step Afrika!, performing two shows on Saturday, April 28, 2018 at 3pm & 8pm. These public performances are part of a three-day Brooklyn residency that also includes weekday educational shows for schoolchildren. Tickets for the public performances are $35 and can be purchased at BrooklynCenter.org or by calling the box office at 718-951-4500 (Tue-Sat, 1pm-6pm).
Day-of-show tickets should be purchased at Kumble Theater on the downtown Brooklyn campus of LIU, located at 1 University Plaza, or by calling the Kumble Theater box office at 718-488-1624.

Having been one of the highlights of Brooklyn Center’s 2015-16 and 2016-17 seasons, the company returns to the borough with a program that combines fresh, new works with favorites from its extensive repertoire. The upcoming Brooklyn residency will include an excerpt from The Migration: Reflections on Jacob Lawrence, the company’s new dance-theater work inspired by the visual artist’s groundbreaking “The Migration Series.” Charting the story of African-American migrants moving from the South to the North in the early 20th Century, The Migration enjoyed a successful Off-Broadway run at the New Victory Theater in November 2017, subsequently touring across the United States.

“Brooklyn audiences bring out our absolute best,” said C. Brian Williams, Founder and Executive Director of Step Afrika! “It’s exciting for me to watch the artists transfer the energy and excitement of Brooklyn into their performances. The Company is thrilled to once again be a part of Brooklyn Center’s season and perform in one of the greatest cities in the world. We plan to have a very good time on stage and in Brooklyn!”

Founded by C. Brian Williams in 1994 and holding the distinction of being the first professional company in the world dedicated to the art of stepping, Step Afrika! aims to promote an appreciation for stepping and its uses as an educational, motivational, and healthy tool for young people. Performances are much more than dance shows; they integrate songs, storytelling, humor, and audience participation. Over the past two decades, the company has grown to become one of the top 10 African American dance companies in the U.S., as well as Washington D.C.’s largest African American arts organization.

In addition to its rigorous touring schedule, Step Afrika! also has a robust arts education program, promoting stepping as an educational tool for young people with a focus on teamwork, academic achievement, and cross-cultural understanding. Workshops were developed in partnership with the Kennedy Center’s education department, Washington Performing Arts Society’s Concert-in-Schools Program, and the Arts for Every Student program, run by the DC Arts and Humanities Education Collaborative. The Company offers programs for grades K-12 as well as college students in the Washington D.C. area, conducted by trained teaching artists with flexible scheduling options from one-time workshops to residencies and summer experiences.

Step Afrika! reaches tens of thousands of Americans each year through a 50-city tour of colleges and theatres and performs globally as Washington, DC’s one and only Cultural Ambassador. Step Afrika! has earned Mayor’s Arts Awards for Outstanding Contribution to Arts Education (2005), Innovation in the Arts (2008), and Excellence in an Artistic Discipline (2012), and performed at the White House for President Barack Obama and the First Lady, headlining their 2016 Presidential Black History Month Reception. The company is featured prominently at the Smithsonian’s new National Museum of African-American History & Culture with the world’s first stepping interactive.

Brian Williams (Founder/Executive Director)is a graduate of Howard University in Washington, DC and a native of Houston, TX. Brian first learned to step as a member of his fraternity, Alpha Phi Alpha Fraternity, Inc. Beta Chapter in 1989. After a fellowship in Southern Africa, he began to research stepping, exploring the many sides of this exciting, yet under-recognized American art form and founded Step Afrika! in 1994. Williams has performed, lectured, and taught in Europe, South & Central America, Africa, the Middle East, Asia, the Caribbean, and throughout the United States.

He is a co-founder of the historic Step Afrika! International Cultural Festival in Johannesburg, South Africa.

Under Brian’s leadership, stepping has evolved into one of America’s newest cultural exports and inspired the designation of Step Afrika! as Washington, DC’s official Cultural Ambassador. Brian has been cited as a “Civic/Community Visionary” by NV Magazine and “Nation Builder” by the National Black Caucus of State Legislators. He is featured in Soulstepping, the first book to document the history of stepping, and several documentaries discussing the art form. Brian is also a recipient of numerous awards including the Mayor’s Art Award for Innovation in the Arts and the Pola Nirenska Award for Contemporary Achievement in Dance. Most recently, Brian received an appointment from Mayor Muriel E. Bowser to serve as a Commissioner for the DC Commission on Arts & Humanities.

Mfoniso Akpan (Artistic Director) has trained extensively in tap, ballet, jazz, modern, African dance, and step. While attending the State University of New York at Stony Brook, she majored in biochemistry and cultivated her stepping skills as a member of Delta Sigma Theta Sorority, Inc. Mfon began her training at the Bernice Johnson Cultural Arts Center and has performed at Carnegie Hall, Avery Fisher Hall, the Apollo Theater, the Brooklyn Academy of Music, and Lincoln Center. Mfon toured with the off-Broadway show Hoofin’ 2 Hittin, where she was a featured stepper and dancer.