Starlight Music Series at the Top of the Rock

Visit the 67th floor at Top of the Rock Observation Deck from 7:00 pm to 9:00 pm on February 12th, 14th, 19th & 26th to experience the winter music showcase. Enjoy live music while taking in the spectacular, 360-degree panorama of New York City. Wine and champagne will also be available for purchase from The Sea Grill. The Starlight Music Series is free with the price of admission to Top of the Rock.

The lineup for the 2014 Starlight Music Series: 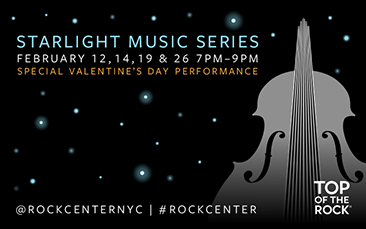