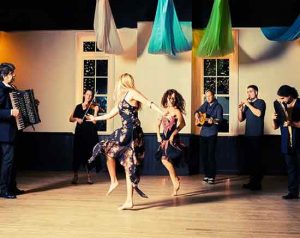 Newpoli plays upbeat, danceable Southern Italian folk music that bring together influences from the entire Mediterranean region. You will hear sounds from Africa, the Middle East and Greece. The concert will be preceded by a dance lesson, so be sure to join your fellow explorers on the dance floor for one of FTH’s Global Dance Hall events, and take a journey through time, culture, and musical styles.

(Flushing, N.Y.) – On Friday, March 2, Flushing Town Hall presents an evening of southern Italian music and dance when Newpoli takes the stage with a repertoire of upbeat, danceable folk music that merges influences from Africa, the Middle East, and Greece.

The award-winning Newpoli has a unique and powerful sound, with a modern take on traditional music, and is an inspiring interpreter of southern Italy’s taranta, drawing deeply from this lesser-known music genre. The group stirs up a mesmerizing meld of traditional Italian folk music, Greek, and Turkish grooves, Mediterranean and Spanish colors, and a contemporary sensibility they call Mediterranean Pulse – Ritmi della Terra.

You can see highlights from Newpoli performances here.

The group is fronted by singers Carmen Marsico and Angela Rossi, a pair that PopMatters called “visual and musical cynosures with their contrasting looks and twining vocal lines.” The tamburello, played by virtuoso Fabio Pirozzolo, pounds out the heartbeat of Newpoli’s music, and the singers launch into a frenetic dance destined to bring audience members to their feet.

Our work is also supported by gifts made in memory of Irene Seligman.

Flushing Town Hall (FTH) presents multi-disciplinary global arts that engage and educate the global communities of Queens and New York City, in order to foster mutual appreciation.  As advocates of arts equity since 1979, we support local, immigrant, national, and international artists, developing partnerships and collaborations that enhance our efforts.  As a member of New York City’s Cultural Institutions Group (CIG), we serve to restore, manage and program the historic 1862 landmark on behalf of the City of New York. FTH celebrates the history of Queens as the home of Jazz, by presenting the finest in Jazz performance.  We are committed to arts education and hands-on learning, for the arts-curious, arts enthusiasts, and professional artists.  We serve one of the most diverse communities in the world, and strive to uphold the legacy of inclusiveness that has defined our community since the Flushing Remonstrance of 1657.