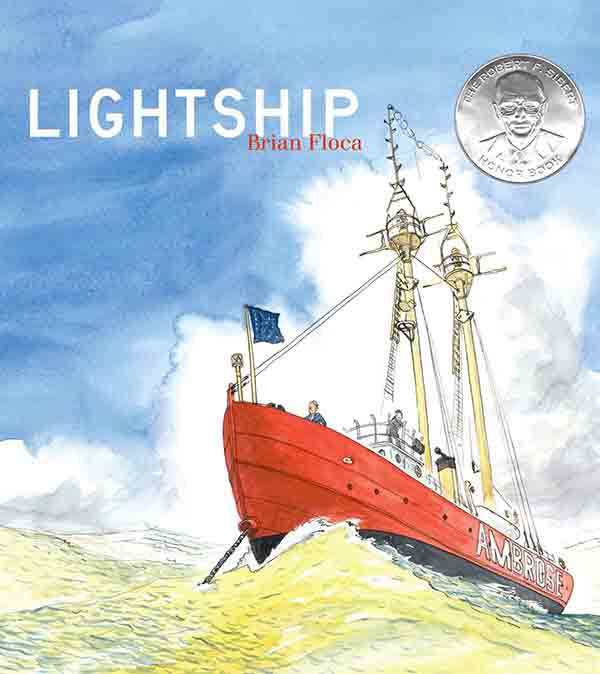 FROM BOOK TO BOAT

The South Street Seaport Museum presents FROM BOOK TO BOAT, a celebration of the 10th anniversary of Brian Floca’s award-winning children’s book Lightship at the South Street Seaport Museum’s Melville Gallery (213 Water Street, NYC 10038) Saturday,March 25, 2017 from 10am – 12pm. A family event for all ages, tickets can be purchased at www.seaportmuseum.org/lightship-book-talk.

Join award-winning and bestselling author and illustrator Brian Floca for FROM BOOK TO BOAT, a presentation on the creation of his book LIGHTSHIP, which will celebrate ten years in print this March. Brian will share slides and stories about his inspiration – the South Street Seaport Museum’s very own Ambrose lightship – and the process of researching, writing, and illustrating a picture book. There will be a Q&A and illustrations by Brian Floca to follow.

Brian Floca is the author and illustrator of numerous books for children, including Locomotive, Moonshot: The Flight of Apollo 11, Lightship, and The Racecar Alphabet. In 2014, he was awarded the Caldecott Medal for his book Locomotive. Brian’s books have additionally received four Robert F. Sibert Honor awards, a silver medal from the Society of Illustrators, and have twice been selected for the New York Times’ annual 10 Best Illustrated Books list. A native of Texas, Brian lives and works in Brooklyn. You can learn more at brianfloca.com.

Lightship LV-87 AMBROSE was built in 1907 as a “floating lighthouse” to guide ships safely from the Atlantic Ocean through the Ambrose Channel and into the broad mouth of lower New York Bay. South Street Seaport Museum’s Ambrose occupied her original station from 1908 until 1932. Having served as the beacon into NY Harbor during the city’s transformation into an international metropolis, the ship bore witness to and was a participant in numerous significant events.The great ocean liners Olympic, Lusitania, Mauretania and Leviathan all passed Ambrose as they entered New York Harbor. Aboard these ships, and hundreds like them, countless immigrants passed Ambrose on their way to NYC during one of the greatest waves of immigration in US history. In 1921 Ambrose became the first lightship fitted with a radio beacon, greatly assisting navigation of the channel in poor visibility. She was given to South Street Seaport Museum by the U.S. Coast Guard in 1968. The Seaport Museum is planning a full restoration of this ship as a floating classroom to tell the story of immigration in the US, making it a great resource for New York City public schools as well as to the visiting public. During the spring and summer, tours of the lightship Ambrose are included with regular museum admission. For tickets, visit https://southstreetseaportmuseum.org/visit/street-of-ships/lightship-ambrose/.

South Street Seaport Museum is a non-profit cultural institution located in the heart of the historic Seaport district in New York City. Founded in 1967, the South Street Seaport Museum preserves and interprets the history of New York as a great port city. Designated by Congress as America’s National Maritime Museum, the Museum houses galleries and education spaces, working nineteenth century print shops, a maritime library, a maritime craft center, and a fleet of historic vessels that all work to tell the story of “Where New York Begins.”