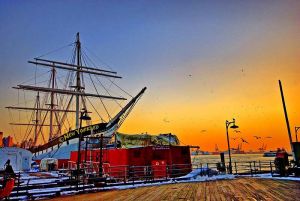 South Street Seaport Museum extends its fall season with visits to the 1885 tall ship Wavertree with additional dates on October 3, 4, and 10, with timed entries from 11am-5pm at Pier 16 (Fulton and South Streets). Entry is FREE and includes access to the ship’s outdoor areas, including the main deck (via stairs and an angled gangway) and raised rear deck (accessible via ladder-type stairs). Reserve timed entry tickets and find more information at seaportmuseum.org/visitwavertree.

President and CEO, Capt. Jonathan Boulware said, “The Seaport Museum is thrilled to welcome back visitors to our historic ship Wavertree on select days in September and October. To date, over 1,500 New Yorkers have walked onboard for free, and we anticipate sharing our flagship with another 2,000 visitors through October. As an educational organization dedicated to the beginnings of the City of New York, the South Street Seaport Museum has long prioritized supporting New York’s public-school system. We are particularly pleased to make free tickets available to local school-aged children and their caregivers ahead of the official start of school. With new protocols in place to protect the health and safety of our visitors and staff, we look forward to welcoming visitors of all ages on board in the coming weeks.”

On Wavertree Open Days in October, Bowne & Co. will also host free, curbside, socially distanced demonstrations. The printers at Bowne & Co., will set up a selection of historic presses outdoors on the steps of 209-211 Water Street. Demonstrations will take place continuously between 11am-5pm, and each will run 5-7 minutes long, illustrating the 19th century printing process with a variety of presses and equipment from the Museum’s Printing History Collection. Items printed throughout the day will be given away as tangible reminders of the experience. Alongside demonstrations, select items from Bowne & Co., Stationers will be available for purchase in the open-air stoop shop.

All guests above the age of two will be required to wear a face covering at all times aboard Wavertree, in the Bowne & Co. demonstration area, and at the Museum’s pop-up gift shops. Guests will be asked to sanitize their hands and avoid touching any objects. The Museum will allow no more than 35 guests on board the ship at any time to encourage social distancing from different households.

Visits on Wavertree will be self-guided along a set route. Guests will visit the open-air portions of Wavertree, which is designated on the National Register of Historic Places and represents the thousands of ships that docked along New York’s waterfront over the centuries. Wavertree is permanently moored at Pier 16 and does not sail the harbor. Access to Wavertree requires climbing a small set of ladder-type stairs and an angled gangway. Wavertree Open Days are subject to cancellation in the event of severe weather. Further information on the history of Wavertree can be found at southstreetseaportmuseum.org/wavertree.

The Seaport Museum is also offering a new, FREE outdoor exhibition on Pier 16, which will provide the opportunity to discover this chapter of New York City’s history. This series of panels and window graphics will celebrate the people of all backgrounds who lived and worked in the South Street Seaport Historic District, and the many businesses that created the foundations for New York to thrive and become the business and culture mecca it is today. Using historic photographs, prints, lithographs, and paintings, the exhibition highlights some of the Seaport Museum’s collection of more than 28,000 artifacts and works of art, and over 55,000 historic records.

The free outdoor exhibition, Wavertree Open Days, and Bowne & Co. demonstrations are made possible by South Street Seaport Museum Members. Memberships start at $50 and help support the Museum’s exhibitions, preserve the ships and the collections, grow public programs, and serve over 12,000 students through education initiatives. To join the Museum as a Member, visit seaportmuseum.org/membership.

The South Street Seaport Museum’s indoor spaces are currently closed due to the COVID-19 pandemic.

About Wavertree
The 130-year-old Wavertree, built of riveted wrought iron, is an archetype of the sailing ships of the latter half of the 19th century that, during the “age of sail,” lined South Street by the dozens, creating a forest of masts from the Battery to the Brooklyn Bridge. Built in Southampton, Great Britain, she circled the globe four times in her career, carrying a wide variety of cargoes. The ship called on New York in 1896, no doubt one of hundreds like her berthed in the city. In 1910, after thirty-five years of sailing, she was caught in a Cape Horn storm that tore down her masts and ended her career as a cargo ship. She was salvaged and used as a floating warehouse and then a sand barge in South America, where the waterfront workers referred to her as “el gran Valero,” the great sailing ship. She was saved by the Seaport Museum in 1968 and towed to New York to become the iconic centerpiece of the “Street of Ships” at South Street two years later. From 2015-2016, Wavertreeunderwent a $13 million restoration generously funded by New York City’s Department of Cultural Affairs with support from the Mayor’s Office, the City Council, and Manhattan Borough President and managed by the Department of Design and Construction.

About Bowne & Co.
Bowne & Co. was established by Robert Bowne in 1775 and is New York’s oldest operating business under the same name. By 1900, New York City boasted over 700 printing offices. Most were located in Lower Manhattan and the South Street Seaport Historic District to facilitate shipping, trade, and finance. Maritime trade industries-growing each year as their goods reached the entire country through the Erie Canal-found themselves in need of a flurry of printed materials for conducting business, causing the demand for stationery, invoices, advertisements, and other printed materials. In 1975, Bowne & Co. Inc. partnered with the Seaport Museum to open a 19th-century-style print shop at 211 Water Street in the South Street Seaport Historic District. Today, in addition to the letterpress printing collection, Bowne & Co. embodies the spirit of a turn-of-the-century store that is unique, eclectic and like none other in the city.