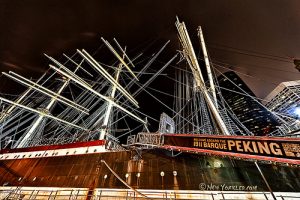 Join us aboard the historic 1885 tall ship Wavertree to celebrate New York’s connection to the water-past, present, and future and to recognize five decades of volunteerism at the South Street Seaport Museum. Cocktail or business attire. This is an outdoor shipboard event; please plan your footwear accordingly.

New Tours Aboard Tugboat W.O Decker with Expanded Schedule
Take a 60-minute ride on New York’s last remaining New York-built wooden tugboat and see the Statue of Liberty, Ellis Island, and the lower Manhattan skyline as never before. W.O. Decker will cruise past Governor’s Island with Battery Park, and One World Trade Center then head to the Statue of Liberty for stunning harbor views. This May marked the first time Decker was available for public cruises in nearly a decade, now with an expanded schedule: Wed-Friday: 2pm and 7pm. Sat & Sun: 1:30pm, 3pm, 4:30pm and 7pm. Decker Tours are $35 and include admission to the Museum. Cruises at 7pm do not include museum admission and are $25. Cruises can be booked in advance at https://web.ovationtix.com/trs/pr/1011575.

New Exhibition: The Printed Port
The Printed Port illuminates an industry central to the development of New York City: job printing. Printers were a mammoth force in the 19th-century Port of New York; they produced all manner of printed materials for the businesses flourishing on South Street, including those in the maritime trades. The South Street Seaport Museum’s printing office and stationers, Bowne & Co. was one of hundreds of shops that made up New York’s first neighborhood. The exhibition features original and reproduced artifacts from the South Street Seaport Museum’s collection, including working printing presses. A survey of printed ephemera presents the tools and techniques involved in their production. The Museum’s working collection artifacts are activated daily, as the professional printing staff at Bowne & Co. host live demonstrations and workshops. Entrance to this exhibit is included with Museum admission https://web.ovationtix.com/trs/pr/957100.

NEW: Visit the Cargo Hold of Wavertree
Included in the price of admission, the South Street Seaport Museum now offers a new level of access to Wavertree, a 134-year-old ship built of riveted wrought iron and the iconic centerpiece of the “Street of Ships” at South Street. For the first time, visitors can take a tour into the belly of the ship to view the breathtaking main cargo area as tours are conducted into the massive lower hold space to a viewing platform. Tickets are available at https://web.ovationtix.com/trs/pr/957100.

Maritime Song Sessions Aboard Wavertree
Join us for our final maritime singing session aboard Wavertree from 2pm to 4:30pm, led by members of the New York Packet chantey singers. Free with Museum admission, or $5 for Song Session only with promo code CHANTEY2019. Head to https://web.ovationtix.com/trs/pe/10366236 and select a General Admission ticket.

On-Going Exhibition:
Millions: Migrants and Millionaires aboard the Great Liners, 1900-1914,
familiarizes viewers with passenger life aboard ocean liners, the defining differences between travel for wealthy Americans in First Class and future Americans immigrating to the United States in Third Class, and the continuing importance that immigration plays in American history. Millions is one of the first exhibitions to examine, side-by-side, the dichotomy between First Class and Third Class passengers aboard ocean liners in the early 20th century. From 1900 to 1914, nearly 13 million immigrants traveling in Third Class arrived in the United States. During this same period, America’s wealthiest citizens, totaling no more than a hundred thousand passengers each year, traveled to Europe in First Class, spending the equivalent of over $11.5 billion on luxury vacations. Even though First Class and Third Class sailed on the same ships, their journeys were worlds apart. This exhibition features both original and reproduced artifacts from the South Street Seaport Museum’s permanent collection including ocean liner memorabilia and ephemera, ceramics, and luggage trunks from both immigrants and First-Class passengers. The exhibition highlights a few ship models of New York Harbor working vessels that played critical roles in immigration, including a model of the Museum’s lightship Ambrose (LV-87).

About the South Street Seaport Museum
The South Street Seaport Museum, located in the heart of the historic seaport district in New York City, preserves and interprets the history of New York as a great port city. Founded in 1967, and designated by Congress as America’s National Maritime Museum, the Museum houses an extensive collection of works of art and artifacts, a maritime reference library, exhibition galleries and education spaces, working nineteenth century print shops, and an active fleet of historic vessels that all work to tell the story of “Where New York Begins.”