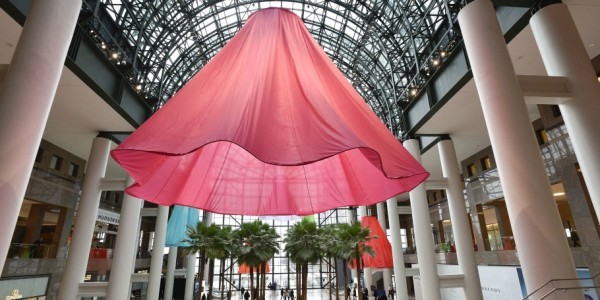 A Sound and Sculptural Installation by Heather Nicol

Soft Spin is a sound and sculptural installation designed for the Winter Garden, the iconic Lower Manhattan atrium at the heart of Brookfield Place. The work features six large-scale fabric forms gracefully swirling overhead, emanating the sounds of voices in song. Curvaceous hemlines, sundrenched bursts of color and playful tunes invite viewers to look up and embrace the unexpected.

In a bow to the Winter Garden’s 25-year history as a performing arts space, Soft Spinplays with notions of being in the spotlight, on display, or “playing a part.” The gently spinning and singing sculptural forms draw upon theatrical, dance and choral traditions, deftly moving between collective experiences of polis – public place – and the private world of the individual.

Heather Nicol is a Toronto-based artist and curator. Her artworks and projects have been exhibited in galleries in New York, Brooklyn, Buffalo, Milly, Berlin, Montreal and Toronto, including non-traditional locations such as Toronto’s soaring atrium at Brookfield Place, the Great Hall of Union Station (Nuit Blanche), the decommissioned Shaw Street School, and in a 30,000 square foot vacant sweatshop. She received her BFA (honors) from the School of Visual Arts in New York, MA in Art Education from NYU, and interdisciplinary MFA from OCAD University, Toronto.