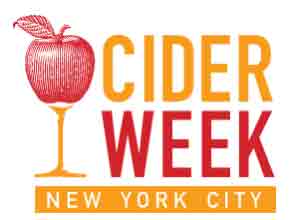 of the New York Cider Association

New York, NY, September 28, 2016 – For the 6th annual Cider Week NYC, an impressive assemblage of more than 25 cider makers and dozens of New York City’s most influential bars, restaurants and retail shops unite for 10 days of tastings, dinners, classes and more. For a full description and listing of events and locations, visit: ciderweeknyc.com.

Highlights of this year’s festival, spanning neighborhoods in Manhattan, Brooklyn and Queens, include The Lower East Cider Fest, a family-friendly block party/farmers market that draws attention to the connection between farming and cider. It returns on Sunday, October 23 after its gangbusters debut last year. Another high-profile event is the inaugural Cider Revival – the largest tasting in the history of Cider Week, featuring over 25 cider producers and La Grande Fondue from Murray’s Cheese at the Bowery Hotel on Monday, October 24. Twenty-plus more events, from free tastings and tap takeovers to ticketed dinners and classes, complete the schedule..

This year’s Cider Week NYC ushers in the New York Cider Association (NYCA), a craft beverage trade group launched last year in response to the state’s rapidly expanding industry. Glynwood, founder of the Cider Project and Cider Week, helped form this group of forward thinking cider makers with the goal of fostering sustainable growth for this fledgling industry, and holds a seat on its Board of Directors.

At over 1 million gallons, New York State’s cider volume utilizes a measurable share of New York’s annual apple crop. As a result of Craft Beverage-focused regulatory reforms, legislative changes and business-friendly policies initiated by the Cuomo administration beginning in 2011, the number of cideries and volume of cider produced in New York State have grown significantly. The steep growth trajectory for the period between 2011 and 2015 is illustrated by a 750% increase in cider production volume, and 1200% growth in number of licensed cider producers, from 5 to 65. New York State is the nation’s leader in number of cideries.

In addition and of equal importance to their contribution to the state’s economy, cider makers contribute to the viability of farming by creating premium agricultural products with sophisticated and pleasing qualities.
Cider Week NYC is possible because of ongoing support from founding sponsor Glynwood and funding from Empire State Development and Taste NY, NYS Department of Ag & Markets’ program to support the best of regional farm-based food.