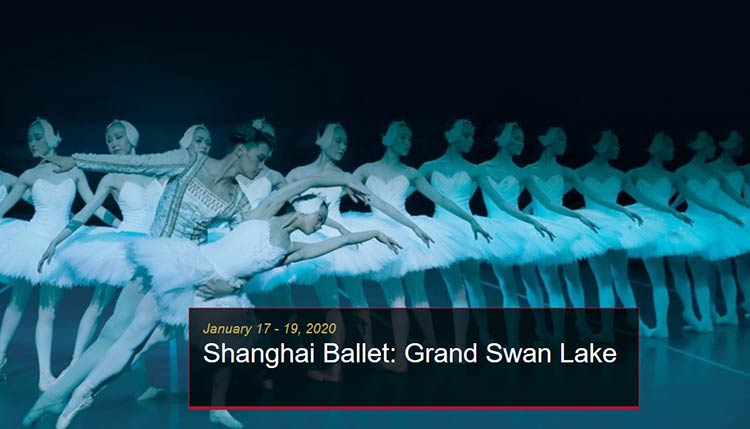 at the David H. Koch Theater at Lincoln Center for the Performing Arts

Shanghai Ballet comes to the David H. Koch Theater with its internationally prominent and critically acclaimed Grand Swan Lake. With 48 swans on stage, the production was directed and staged by Derek Deane, formerly the Artistic Director of English National Ballet and currently Artistic Director of Shanghai Ballet with his team. The show toured to Netherlands and Belgium from December to January of 2015/16 and August to October 2017 with respectively 26 and 40 successful performances. The Swan Lake also went to Melbourne, Australia in April/May 2017, and Berlin, Germany and Vienna, Austria in November/December 2018 with other triumphant 30 performances. Featuring principal dancers Wu Husheng and Qi Bingxue as well as international guest stars, the grand version Swan Lake, with more than 80 dancers’ participation, will follow the timeless tragic love story of Princess Odette and Prince Siegfried and feature the timeless music of Pyotr Ilyich Tchaikovsky, performed live by the New York City Ballet Orchestra, conducted by Charles Barker from American Ballet Theatre.

With sets and costumes by Peter Farmer, and lighting design by Howard Harrison, Shanghai Ballet’s Grand Swan Lake is renowned for its choreographic crispness, sweeping and lush visuals, and the awe-inspiring skill.

ABOUT THE ARTISTS
Derek Deane joined The Royal Ballet in 1972 and rapidly rose through the ranks to become Senior Principal in 1980. He danced all the major roles in the repertoire including specially created roles by many of the world’s leading choreographers. Having created numerous ballets for The Royal Ballet and Birmingham Royal Ballet, Deane left The Royal Ballet in 1989 in order to create a wider body of choreographic works. From September 1990 until October 1992 he was Deputy Artistic Director and Resident Choreographer at the Teatro dell’ Opera in Rome. Since October 1992, he has staged and choreographed productions throughout Italy and created ballets in the USA, France, Japan and South Africa.Derek Deane was appointed Artistic Director of English National Ballet and English National Ballet School in the spring of 1993. His choreography for the Company includes a re-staging of Marius Petipa’s Grand Pas from Paquita, a new production of Giselle, which premiered in 1994 and a new production of Alice in Wonderland, Which premiered in 1995. Other works in English National Ballet’s repertoire include Impromptu, Which he originally choreographed for The Royal Ballet. In September 1995 he was the subject of a BBC television documentary which took the form of a year long video diary.Deane also choreographed a unique staging of The Nutcracker, which premiered in 1997 and performed the role of Drosselmeyer when it returned to the London Coliseum in December 1998 and 1999. His new production of Romeo and Juliet in the round was premiered in 1998 at the Royal Albert Hall and was later re-staged by Deane for a spring tour in 1999. Deane’s production of Swan Lake, which premiered at the Royal Albert Hall in 1997, received two nominations for the Laurence Olivier Awards in February 1998. In 1999 this production was seen by a record 250,000 people worldwide in a tour that performed at arena venues in Hong Kong, Sydney, Melbourne, Adelaide and Brisbane before returning to the UK for a 5-venue tour. In summer 2000, Deane choreographed The Sleeping Beauty, his third in-the-round production, which was performed at the Royal Albert Hall.Derek Deane was awarded an OBE in Her Majesty the Queen’s Birthday Honours List in June 2000.

Entering the Shanghai Dance School in 1997, Wu Husheng became a dancer of the Shanghai Ballet after his graduation in 2003 and was promoted to be the first principal dancer in 2010. He has danced main roles in Swan Lake, The Nutcracker, Coppelia, La Sylphide, Romeo and Juliet, The Sleeping Beauty),Jane Eyre, Echoes of Eternity, Hamlet, Giselle, The White-haired Girl, The Butterfly Lovers, Bright Red Star, and The Nutcracker (Shanghai Grand Theatre’s Version). He also performed George Balanchine’s Serenade, La Valse, and modern pieces Conversation with Chopin, La Danse du Stravinsky, Grand Pas de Bach, Web5, and The Song of the Mother. Wu has won numerous awards, including the Special Jury Award at 3rd Shanghai International Ballet Competition in June 2004, the ‘Shanghai Labor Medal’ and ‘Young Talent of Shanghai Arts Culture’ in 2012, Best Actor Award in 24th Shanghai Magnolia Stage Performance Award, ‘Shanghai Literature and Art Award’ in 2013, and the Best Male Dancer of the 10th China Dance Lotus Award in 2016. He participated in the performance in Nijinsky with Hamburg State Opera in 2012. He choreographed the contemporary piece Blackthorn in July, 2018. He won 6th Shanghai International Ballet Competition Choreography Award with his contemporary piece Adieu, and his choreography Smile in the Dream won the prize for “the Best Choreographer” in Excellent Performance of Young Dancers in 2018.

Entering the Shanghai Dance School in 2007, Qi Bingxue became a dancer of the Shanghai Ballet after her graduation in 2014. She has danced main roles in The White-haired Girl, Echoes of Eternity, Hamlet, Swan Lake, Coppelia, Giselle, Jane Eyre, The Last Mission of Marco Polo, and The Sleeping Beauty (Shanghai Ballet Version), and performed important solos and leading dances in The Nutcracker (Shanghai Grand Theatre’s Version) and Bright Red Star. She also performed in The Butterfly Lovers and A Sigh of Love. She won the First Prize at 3rd Beijing International Ballet and Choreographer Competition. She won the Gold Award at 5th Shanghai International Ballet Competition and the Best Female Dancer of the 10th China Dance Lotus Award in 2016.

Shanghai Ballet is active in cooperation and cultural exchange with the artists and companies both abroad and at home. The company not only tours nationwide but also visits many countries and regions, including the U.S.A., U.K, Canada, France, Spain, Netherlands, Belgium, Germany, Austria, Norway, Australia, New Zealand, Japan, Korea, Indonesia, Singapore, Thailand, Finland, Hong Kong, Macao and Taiwan.

About China Arts and Entertainment Group, Ltd.
As China’s sole central state-owned cultural enterprise that has performance and exhibition business worldwide, China Arts and Entertainment Group Ltd. (CAEG) has developed a nationwide market network of international performing arts, art exhibitions, cultural tourism and theater operation, and set up branches in major cities in China as well as some European and American countries. As the largest importer of international performances and exhibitions in China and the world’s largest exporter of Chinese performances and exhibitions, CAEG stages on average over 4,000 different kinds of performances, exhibitions and other cultural activities in over 200 cities in dozens of countries and regions, attracting over 10 million attendees every year.