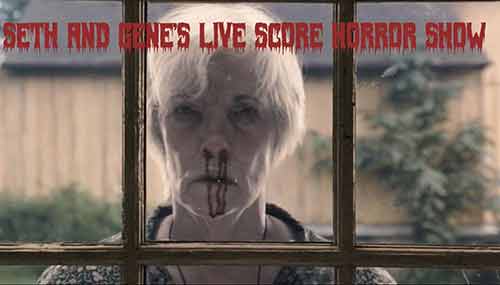 at The Delancey, 168 Delancey st NYC

Featuring zombies, stalkers, lovesick chainsaw murderers and just gallons and gallons of blood, this is the only Halloween show you need. And you do need it.

Gene – Di.J
‘Blood Scenes’
For trumpet, Di.J. and narrator with live film. I take the bloodiest and goriest moments from various horror movies and string them together to make a strange scary video. I score this video for trumpet, and Di.J. (digital jockey – computer only). Trumpeter Franz Hackl  and I as Di.J. will be joined by Sean Satin, who will read some blood related poetry over the big finale to this piece.

Seth – piano
The Happening by M. Night Shyamalan
Consistently ranked as M. Night Shyamalan’s worst film, the Happening features plants taking revenge on humanity through an airborne toxin that turns people into suicidal zombies, or something. This condensed version features only the absolutely best worst parts.

Rearview by Chase Casanova
A woman sees a strange, menacing figure behind her car in an empty parking lot…

Leatherface in Love by Alexander Bickford
Leatherface meets his female counterpart in this darkly comedic reintroduction to one of the horror genre’s most iconic characters.

Composer Gene Pritsker has written over six hundred and fifty compositions, including chamber operas, orchestral and chamber works, electro-acoustic music and songs for hip-hop and rock ensembles. All of his compositions employ an eclectic spectrum of styles and are influenced by his studies of various musical cultures. He is the founder and leader of the eclectic ensemble: Sound Liberation, as well as being the co-director of Composers Concordance. Gene’s music has been performed all over the world at various festivals and by many ensembles and performers.

The New York Times described him as “…audacious…multitalented.”

“Pritsker has a natural ability to write music that is unselfconsciously original and absorbing in a way that resembles nobody else.” – Gapplegate Classical-Modern Music Review, April 2015

Seth Boustead is a composer, radio host, arts manager and writer, concert producer, in-demand speaker and visionary with the goal of revolutionizing how and where classical music is performed and how it is perceived by the general public.  He received his Master of Music Composition degree from the Chicago College for the Performing Arts in 2002 and has gone on to forge a unique and highly personal musical identity through a prolific outpouring of works in every conceivable genre. His music is regularly performed across the United States and in Europe and has been heard on radio and television stations in Chicago, San Francisco, New York and Paris among others.