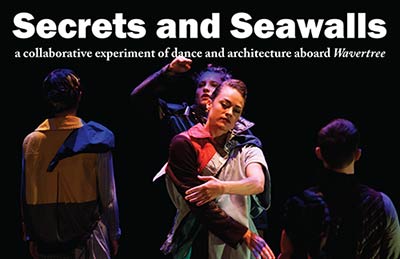 a collaborative experiment of dance and architecture

aboard the 1885 cargo ship Wavertree

The South Street Seaport Museum and Kinesis Project dance theatre present Secrets and Seawalls on Thursday, July 20, 2017 at 7pm; Thursday, July 27, 2017 at 7pm; and Sunday, July 30, 2017 at 5pm aboard the restored 1885 full-rigged cargo sailing ship Wavertree. Tickets are $30 ($25 for South Street Seaport Museum members) VIP tickets are $45 ($40 for members). VIP experience includes exclusive pre-show tour of Wavertree and after show meet and greet with the performers. Tickets are available at https://southstreetseaportmuseum.org/secrets-and-seawalls/.

Secrets and Seawalls is an evening of dance in two distinct acts. Inspired by storms and disruption, Melissa Riker, in collaboration with architect Lee H. Skolnick, FAIA, uses methods of dance and architecture to explore vulnerability, power, and how each are revealed. Dancers whisper across an expanse; stealing and sharing secrets in a shifting, immersive environment. The piece is spurred by questions: Does power exist in the structures we create? In the way we withhold information? Or, is it in the vulnerability revealed before the storm? The work premiered along the beach at Fort Tilden in Gateway National Park, The Rockaways in 2015.

“The partnership with architect Lee H. Skolnick is apparent as the audience is coaxed along the promenade by the dancers who, like mischievous water nymphs, lure you to a graffiti-strewn concrete carcass where they are perfectly framed; dip diving through the building’s shell.” –The Dance Enthusiast

“The Kinesis Project dance troupe turned the Fort Tilden shoreline into an outdoor theatre…Using the expanse of the abandoned graffiti’ed buildings, the beach and ocean’s edge as their performance space…“ -THE WAVE, Rockaway Beach, NY, November 20, 2015

Secrets and Seawalls stems from the choreographer’s questions about the integrity of NYC’s seawalls and the impact of weather. Working in collaboration with architect Lee Skolnick, Riker and Skolnick use the lenses of their respective art forms to create a dance work that tracks vulnerability in ourselves and in structures. Choreography by Melissa Riker, in full collaboration with the dancers. Dancers: Cassandra Cotta, Zachary Denison, Michelle Amara Micca, Zoe Allocco. Concept collaboration: Lee Skolnick, FAIA. Costumes by Asa Thornton.  Live Music by Katie Down, Helen Yee and Michael Evans.

Since 2005, Kinesis Project’s work has been experienced in San Francisco, San Diego, Seattle, Boston, Philadelphia, Vermont, Florida and in New York City at such venerable venues as Danspace Project, Judson Church, Joyce Soho, The Minskoff Theatre, The Cunningham Studio, West End Theatre and Dixon Place.  The company dances outside in sculpture gardens, universities, and annually since 2006 in Battery Park’s Bosque Gardens and The Cloisters Lawn as well as hosting over 30 surprise performances all over New York City and the tri-state area as an element of the company’s earned income and outreach programming with volunteer populated flashmobs. Residencies include: Earthdance 2006, Omi International Arts Center 2008, Kaatsbaan International Dance Center 2011, TheaterLab 2014, Adelphi University 2014. Ms. Riker is a 2016 and 2017 CDI Residency Fellow, 2015 LMCC Community Arts Fund grantee and was commissioned by The Brooklyn Botanic Garden for a surprise large-scale work and performances of her work Secrets and Seawalls at Omi International Arts Center, Long House Reserve, Gateway National Park in partnership with Rockaways Artist Alliance. Ms. Riker has received commissions from Carson Fox and the Ephemeral Festival in 2013, 2014, 2015 and 2016 for large-scale outdoor events, NYU in 1998, for an outdoor work long before “flashmob” was coined, 2006 and 2008 grants from the Puffin Foundation for her work Community Movements, a dance work with community volunteers, Fellowships from the Dodge Foundation, Space Grant Residencies from 92nd St Y, The New 42nd St Studio, Gibney Dance Center, and The Joyce Theatre Foundation, and grants from The Bowick Family Trust and John C. Robinson to support the continued work of Kinesis Project dance theatre.

Lee H. Skolnick, FAIA (collaborating architect) seeks to synthesize art, science, and architecture to create memorable and meaningful experiences. He unlocks each project’s “motivating story” to inspire imagination, curiosity, and understanding. For over 35 years, Mr. Skolnick has passionately developed and pursued his philosophy of “design as interpretation,” wherein he seeks to unearth the unique themes and compelling concepts which characterize each project, and to translate them into concrete expression. Breaking down the barriers between disciplines, Mr. Skolnick has created an extraordinary firm where more than 35 designers and educators work in close collaboration. By making a thorough exploration and translation of content the starting point for design, he has brought depth, authenticity, and vision to an enormous array of diverse projects around the world. His museum, cultural institution, and residential projects have been recognized as works of fresh innovation and inspiration. Mr. Skolnick has employed his integrated design philosophy on projects for such clients as the Aileron Center for Entrepreneurial Education in Dayton, OH; the Sony Wonder Technology Lab in New York, Muzeiko: The America for Bulgaria Children’s Museum in Sofia, Bulgaria; the Paley Center for Media in New York and Los Angeles; the Smithsonian Institution in Washington, DC; the Creative Discovery Museum in Chattanooga, TN; the New-York Historical Society; the New York Hall of Science in Queens, NY; the Cooper Hewitt National Museum for Design in New York and the Muhammad Ali Center in Louisville, KY, among many others. Mr. Skolnick also has served on the Boards of The Cooper Union, Longhouse Reserve, the Society for Environmental Graphic Design and the Editorial Advisory Board of the Journal of the National Association for Museum Exhibition (Exhibitionist). He has served on panels and juries for the New York State Council on the Arts, the National Endowment for the Arts and the American Institute of Architects. He is also a frequent lecturer, instructor, and author of scholarly papers and popular works, and is an Honorary Research Fellow at the University of Leicester, England. Since the 1980s, he has been awarded Architectural Digest’s “AD100,” Cooper Union’s “Achievers Under 40,” House & Garden’s “Design Obsession,” the Presidential Citation for Outstanding Achievement from The Cooper Union, “The Most Innovative” by The Best of the Best Luxury Homes magazine, “The Best of the Best” Home Book’s House of the Year, and local, state and national AIA Honor Awards. In 2003, Mr. Skolnick was elevated to the American Institute of Architects College of Fellows. In 2007, he coauthored the exceptional book What is Exhibition Design?; an unparalleled handbook that explores what constitutes successful design and clarifies the roles of the various disciplines involved in exhibition design while exploring how new technologies expand the possibilities for both form and function. In 2008, Architecture Omi, an ambitious new project in Columbia County, New York, named Mr. Skolnick as its first Chairman of the Board. Architecture Omi is part of Omi International Arts Center, a renowned not-for-profit art program that provides artist residency programs and outdoor exhibition spaces on its rural campus, where a collaborative environment flourishes between artists from multiple disciplines. Architecture Omi seeks to explore the myriad intersections of architecture, art, nature and human structure.

The 1885 ship Wavertree has a well-documented and fascinating history. Built in Southampton, Great Britain, she circled the Earth four times in her career, carrying a wide variety of cargoes. The ship called on New York in 1895, no doubt one of hundreds like her berthed in the city. In 1910, after twenty-five years of sailing, she was caught in a Cape Horn storm that tore down her masts and ended her career as a cargo ship. She was salvaged and used as a floating warehouse and then a sand barge in South America, where the waterfront workers referred to her as “el gran Valero,” the great sailing ship, because even without her masts she was obviously a great windjammer. She was saved by the Seaport Museum in 1968 and towed to New York to become the iconic centerpiece of the “Street of Ships” at South Street. The 132-year-old Wavertree, built of riveted wrought iron, is an archetype of the sailing cargo ships of the latter half of the 19th century that during the “age of sail” lined South Street by the dozens, creating a forest of masts from the Battery to the Brooklyn Bridge. The $13 million restoration of Wavertree was managed by the Department of Design and Construction, and fully funded through the City’s Department of Cultural Affairs with support from the Mayor’s Office, the City Council, and Manhattan Borough President’s Office. Restoration work took place at the Caddell Dry Dock in Staten Island. Five months out of the water were spent on extensive hull repairs; along with replacement of two of the ship’s decks and a massive rigging restoration, the project returned the vessel to the condition she was in when she last sailed in 1910.