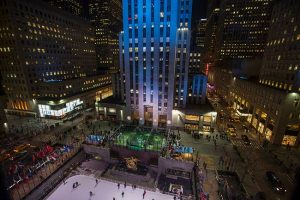 2nd annual 24-hour-long soccer game will take place in Rockefeller Plaza from 4:00 p.m. on March 8 until 4:00 p.m. on March 9. NYCFC players and coaches will participate in the game, and more than 700 New Yorkers will have a chance to play throughout the game, free of charge.

NEW YORK, N.Y., February 27, 2019 – New York City FC and Rockefeller Center today announced that they will host the second annual 24-Hour Game, which will be presented by Degree Deodorant – the only antiperspirant with motion activated freshness – in front of 30 Rockefeller Plaza. Once again, 700+ New Yorkers will come together to play a soccer match on the iconic Plaza and will have the opportunity to be coached by NYCFC players and Head Coach Domènec Torrent in the middle of Manhattan.

Registration to play in last year’s game was entirely filled on launch day. With 714 player participants and more than a half-million attendees, the game ended with a score line of 415-382 goals.

In anticipation of the Club’s 2019 home opener on Sunday, March 10 vs. D.C. United, this year’s participants will be divided into two teams: Team Ring (led by NYCFC Captain Alex Ring) vs. Team Maxi (with last year’s fan-favorite and 2018 team MVP, Maxi Moralez, at the helm).

The 2019 24-Hour Game presented by Degree will kick off with an Opening Ceremony at 4:00 p.m. on Friday, March 8 and will conclude at 4:00 p.m. on Saturday, March 9. City Members will get exclusive access to the first and last hour of the game alongside special guests. Designed to encourage soccer fans to play more, move more and live more, the 24-Hour Game aligns with Degree’s mission to bring movement opportunities to the masses in 2019 and beyond. Since Degree believes the more you move, the more you live, the brand thoughtfully develops antiperspirants that react directly to movement, keeping users fresher, longer.

The five-on-five game will continue for 24 straight hours with participants on rotation. Domènec Torrent and select NYCFC players are scheduled to lend their coaching skills to participants during the start of the event. In addition, there will be DJs, emcees and a sideline reporter entertaining the crowd with prizes and other surprises taking place throughout. A kids’ hour will take place from 11am-12pm on Saturday, March 9 with Sesame Street characters joining the fun.

Fans that register in advance and are selected to participate will receive an exclusive buy-one- get-one ticket offer for the home opener on Sunday, March 10 at Yankee Stadium when the Boys in Blue take on Wayne Rooney and D.C. United. Special 24-Hour Game ticket offers will be available onsite during the event so all fans can join NYCFC at the home opener and other home games this season.

Registration for time slots to play is now open at www.24hourgame.com. Walk-up registration during game time is also available onsite. During the general game hours, players must be 18+ years of age, but all are invited to attend the event. Children participating in the kids’ hour on Saturday morning will be split into three age groups: 5-7, 8-12 and 13-17. Join the conversation on social using #SoccerNeverSleeps and check out last year’s highlight video here.

CEO of NYCFC, Brad Sims, shared his thoughts on the upcoming event:

“For the second year in a row, NYCFC will be at the heart of the five boroughs to rally the City and bring New Yorkers together around soccer. We have the privilege of representing The City That Never Sleeps – so we are harnessing the energy of New York City by hosting our annual 24-Hour Game and inviting everyone to come out and play or join us in celebrating the start of the 2019 season.

“It’s only fitting that we kick off our fifth season at a landmark that’s as rooted in the City’s history as Rockefeller Center.”

“Rockefeller Center long has been one of New York City’s most incredible urban spaces, but thanks to events like this, the Center also has become one of its most beloved parks. Along with the Channel Gardens, public art offerings, and open spaces throughout the plazas, we strive to create an engaging environment for guests to enjoy outdoor space, all in the heart of midtown Manhattan. We’re thrilled to welcome NYCFC back to ‘our park’ at Rockefeller Center this year.”

NYCFC Captain, Alex Ring, also commented on the momentum around soccer in the City and this year’s Team Ring vs. Team Maxi matchup:

“Soccer brings people together and it has been great to see New York City get so excited about our sport and NYCFC. I am looking forward to seeing the crowd come out for this year’s 24-Hour Game.

“I am especially proud that one of the two teams will wear my name this year. I expect to help coach my team to get the win and I expect that we will score more than the 415 goals scored by the winning team last year at Rock Center.”

“I can’t wait for my team to face Team Ring. I hope to lead my team to victory. It’s really exciting to get to see soccer played on such a big stage and for such a long time.”

New York City Football Club is an American professional soccer team based in New York City that competes in Major League Soccer (MLS) in the Eastern Conference of the league. It was announced as the League’s 20th franchise on May 21, 2013 and is the first and only MLS Club located within the five boroughs of New York City. Majority owned by City Football Group (CFG), New York City FC plays its home games at Yankee Stadium, which is also home to minority owner, the New York Yankees.