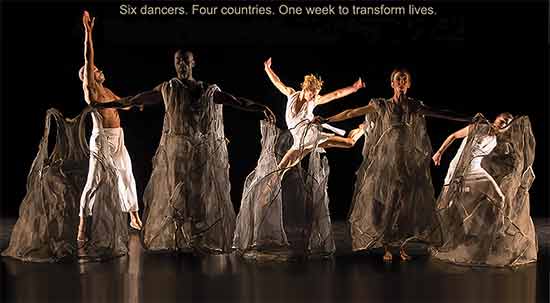 at The Museum of Modern Art as part of  Doc Fortnight 2018: MoMA’s International Festival of Nonfiction Film and Media

Wilderness Films presents Moving Stories, a new documentary featuring members of Battery Dance directed by Rob Fruchtman and produced by Cornelia Ravenal, Mikael Södersten and Wendy Sax. The film will be screened, with a discussion with the filmmakers and members of Battery Dance Company, on Sunday, February 18, 2018 at 7pm at The Museum of Modern Art, 11 W. 53rd Street, NYC, as part of Doc Fortnight 2018: MoMA’s International Festival of Nonfiction Film and Media. Tickets are $12 and are available at https://www.moma.org/calendar/film/3915.

In Moving Stories, six dancers from New York’s Battery Dance travel the world from India to Eastern Europe to the Korean Peninsula to the Middle East, teaching some of the most vulnerable youth about expressing themselves through movement and creativity. Addressing issues from gender violence and poverty to persecution and prejudice, these students respond in extraordinary ways as they prepare to perform in their communities after only a week of rehearsal.

“To me, dance is an art form that triggers emotions and feelings like no other,” said director Rob Fruchtman. “And for that reason, it can help unlock the secrets, emotions and yearnings inside us, whether we’re trained dancers or ordinary bi-pedal beings. Our film, which documents the groundbreaking work of the Battery Dance Company with young people around the world, shows dance as both a way in and a way out. It provides an opportunity to explore important issues viscerally and emotionally, through the best language on the planet, the movement of the body. No words. Just expression that comes from mind and body talking to each other, connecting the inner life to the outer world. The beauty of this kind of expression is that it is unpredictable. It is an exploration, and that, for me, is deeply rewarding for those who come along with us for the ride.”

“The stories told in this sensitive film have become a kind of diary for each of us involved in the Dancing to Connect process,” said Jonathan Hollander, artistic director of Battery Dance. “Bringing them so compellingly to life on the screen is revelatory and galvanizing for us as we continue to explore what a dance company can be in the world.”

ROB FRUCHTMAN is an award-winning director and editor of documentaries and television. He won the 2002 Documentary Director award at the Sundance Film Festival for SISTERH HELEN, which aired on HBO, as well as three Emmy Awards and several nominations for his work with HBO and PBS. He directed and produced SEEING PROOF, about the brutal Khmer Rouge regime and its lingering effect on Cambodia for George Soros’ Open Society Institute. He also made TRUST ME for Showtime, about Jewish, Christian and Islamic boys at an interfaith camp. His last film, SWEET DREAMS, made with sister Lisa Fruchtman, about a women’s drumming troupe made up of women from both sides of the 1994 Rwandan Genocide, has been screened and broadcast around the world.

CORNELIA RAVENAL has won accolades as a writer and producer, including the offbeat documentary FIVE FEELINGS ABOUT FOOD, for which she won 5 film festival Best Awards. Recently she was a lead producer of the 2015 NY Times Critics Pick NIRBHAYA off-Broadway. As the original founder of WIP (Women Independent Producers), she’s an activist for women in the industry. Previously, she worked as a journalist in the US and India.

MIKAEL SÖDERSTEN has works on over 60 narratives and documentaries in the US and his native Sweden. As Scandinavia’s leading script doctor, he has developed winners at Sundance and Tribeca, including LET THE RIGHT ONE IN and the Oscar-nominated TINKER TAILOR SOLDIER SPY. As a film-maker, he produced and directed award-winning shorts and two films broadcast on Swedish TV.

BATTERY DANCE connects the world through dance. The Company pursues artistic excellence and social relevance by creating vibrant new works, performing on the world’s stages, presenting dance in public spaces, serving the field of dance and teaching people of all ages with special attention to the disadvantaged and areas of conflict. Battery Dance is committed to enhancing the cultural vibrancy of its home community in New York City, extending programming throughout the U.S., and building bridges worldwide through international cultural exchange.

Battery Dance performs on the world’s stages, teaches, presents, and advocates for the field of dance. The Company is dedicated to the pursuit of artistic excellence and the availability of the Arts to everyone. An integral part of the fabric of New York City for 41 years, Battery supports the creative process; educates children in the New York City schools; enriches audiences through local programs and performances, national and international tours, and international arts exchange programs.

Based in Lower Manhattan, Battery Dance has produced over 100 original dance works choreographed by its founder and artistic director Jonathan Hollander, in collaboration with a diverse array of composers and designers, and its cast of outstanding dancers.

Battery’s repertoire reveals a wide thematic and stylistic range. Presented in New York City and on tour in the U.S. and worldwide, Battery performances are characterized by choreography and music inspired by worldwide sources, reflecting American society and its multiplicity of cultures. Musical accompaniment, often commissioned, is a hallmark of the Company.

The Company is among New York City’s foremost cultural ambassadors through its participation in international performing arts festivals, conferences and symposia throughout 70 countries on 6 continents. Through the award-winning Dancing to Connect program, the company uses dance as a tool for building social cohesion and resolving conflict throughout the world.

Battery Dance is a community-spirited presenter with the free annual Battery Dance Festival, introducing New Yorkers to over 250 dance companies in more than 35 years. In its Lower Manhattan home-base, equipped with two large studios, the Company provides subsidized rehearsal space for over 400 choreographers and dance companies each year.

Through its arts-in-education programs in New York City public schools, Battery dancers serve as teaching artists in primary, middle and high schools throughout the five boroughs. Battery facilitates in-school performances and master classes by international visiting artists, providing first-hand introductions for many city school children to the cultures of the world.www.batterydance.org