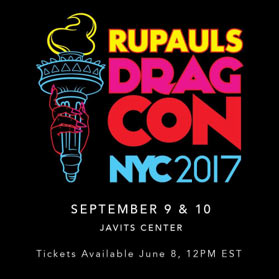 Presented by RuPaul and World of Wonder Productions, the inaugural RuPaul’s DragCon NYC will be held at the Jacob K. Javits Convention Center on September 9-10, 2017. Tickets available at RuPaulsDragCon.com.

The two-day convention, a homecoming for RuPaul and World of Wonder Productions, will welcome fans from around the globe to the first DragCon held in the Big Apple. RuPaul’s DragCon NYC was announced after a record breaking 40,000+ fans attended the third annual DragCon held in Los Angeles earlier this year.