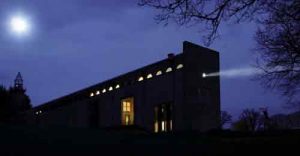 ROSA BARBA at the Museum of Modern Art

Rosa Barba presents the first performance of White Museum — Live in which she plays with the light emitted from a 70mm projector as though it were an instrument. The work is a continuation of Barba’s White Museum series, which began in 2010 with long-term projections of empty white film onto surrounding landscapes of different international museums. For the iteration at MoMA PS1, the artist turns the focus on the interior, illuminating the inside of the VW Dome. By synching the shutter movement of the projector with the percussion of a live drummer (Chad Taylor) and manipulating the architectural and acoustic surroundings, Barba creates her version of a drum machine that pumps light into the Dome, engulfing the space. The result is a performative installation that is both a visual concert and a sculpture of light.

The Museum of Modern Art presents An Evening with Rosa Barba

As part of Modern Mondays

Rosa Barba is a Berlin-based artist whose practice is deeply invested in the materialities, functions, and structures of cinema. Ranging from celluloid sculptures to narrative film installations, her works use cinematic tropes in order to pose larger questions about time and space.

Chad Taylor is a critically acclaimed percussionist and composer based in Brooklyn, NY. He is a co-founder of the Chicago Underground ensembles and has performed with Theaster Gates, Marc Ribot and Iron and Wine.

This event is included with museum admission. Free for all New York City residents.