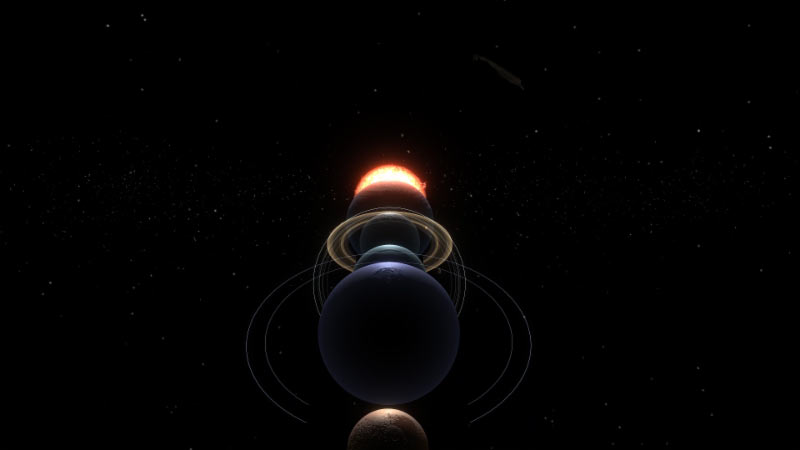 Tickets To Experience The Three-Part VR Series Are On Sale

SPHERES, which sold out of Sundance in an unprecedented seven figure deal, was written and directed by Eliza McNitt, executive produced by Darren Aronofsky, and is narrated by Millie Bobby Brown, Jessica Chastain and Patti Smith

SPHERES made history earlier this year at the Sundance Film Festival when it was acquired by CityLights, becoming the first ever VR experience to sell at a major film festival for seven figures. In September 2018 it became the first virtual reality experience to be programmed and screened at the Telluride Film Festival.

Presented by Rockefeller Center with support from RYOT, tickets will be available for advanced-purchase beginning December 20, 2018 for $50. Screenings will take place seven days a week in 600 Fifth Avenue, (entrance on 48th Street between Fifth and the Plaza), in a custom-designed space-inspired dark room with seven viewing stations. Tickets are available for purchase at www.rockefellercenter.com/attractions/spheres.

“We’ve poured our hearts into this experience and it’s a dream to have SPHERES at Rockefeller Center. Together, we’re making virtual reality accessible to the public,” said writer and director Eliza McNitt. “Now audiences can be transported from New York City to the heart of a black hole. I can’t wait for you to join us on this journey to the cosmos.”

“CityLights made the decision to purchase SPHERES at Sundance because we knew it was something special that audiences would want to experience, as long as we gave them a chance. Our vision for its potential is now unfolding as we partner with New York’s famous Rockefeller Center,” said Joel Newtonwith CityLights. “This is the beginning of something new in VR as we bring immersive content to the public.”

“We are so excited to host the public premiere of SPHERES, this incredible virtual reality experience, at Rockefeller Center,” said Michaella Solar-March, Managing Director Marketing and Experience at Rockefeller Center. “We are constantly looking to bring unique cultural and entertainment offerings to our tenants and all New Yorkers, and this is a perfect fit.”

“RYOT is a studio built on innovation in content—and supporting SPHERES is part of our commitment to representing the best there is to offer in VR—we are pleased to share it with the public in this incredible setting,” said Smiley Stevens, RYOT’s Global Creative Director.

Rockefeller Center, the most recognized commercial property in the world, encompasses six square blocks between Fifth Avenue and the Avenue of the Americas, from 48th to 51st Streets, rising 70 stories above beautiful Midtown Manhattan. It is not only a place of business, but also a premier destination for world-class shops, restaurants and entertainment venues. Millions come to Rockefeller Center each year to see the Rockefeller Center Christmas Tree, skate at The Rink at Rockefeller Center®, celebrate at Rainbow Room or Bar SixtyFive, and see one of the NBC shows that calls Rockefeller Center home including The Today Show and Saturday Night Live.

SPHERES is written and directed by Eliza McNitt and presented by Oculus Studios & Protozoa Pictures. It is produced by Jess Engel, Arnaud Colinart, and Dylan Golden in association with Kaleidoscope. Production companies are Protozoa, AtlasV, Crimes of Curiosity and Novelab. Supported and powered by HP Virtual Reality Technology with the installation designed by the Phi Centre.

Protozoa Pictures is Academy Award®-nominated director Darren Aronofsky’s production company. Founded in 1996, based in Brooklyn and headed by Aronofsky, partners are Ari Handel, and Scott Franklin. Credits include the critically-acclaimed films: White Boy Rick, mother!, Jackie, Noah, Black Swan, The Wrestler, The Fountain, Requiem for a Dream, π and the series One Strange Rock for NatGeo. SPHERES is Protozoa’s first virtual reality project.

RYOT is Verizon Media Group’s Emmy Award®-winning, Academy Award®-nominated premium content studio. RYOT has produced a slate of critically-acclaimed projects that have debuted at Sundance, Tribeca, SXSW, and Hot Docs, among others. Our content impacts audiences globally, with sales and distribution through a variety of platforms, including HBO, Showtime, Netflix, Hulu, ESPN, National Geographic. Highlights include back-to-back Academy Award® nominations for Best Documentary Short Subject (2016 and 2017), as well as the only studio at both Sundance Film Festival and Tribeca Film Festival to have official content premieres across every category and format. RYOT is a division of Verizon Media Group, Verizon’s family of media properties.

Headquartered in Montreal Canada and dedicated to art in all its forms, Phi is a multidisciplinary arts and culture organization that cultivates all aspects of creation, development, production and dissemination. Phi is at the intersection of art, film, music, design and technology. Through a strong emphasis on content creation, eclectic programming and innovative uses of technology to enhance arts, Phi fosters collective experiences and unexpected encounters between artists and audiences. For more information, visit