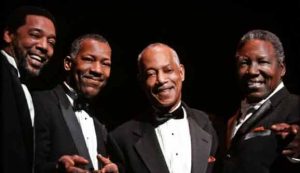 Doo Wop returns to Lehman Center for another night of oldies and fun.

The whales of doo-wop, including The Duprees (“You Belong to Me”), The Platters (“The Great Pretender”), The Belmonts (“A Teenager in Love”) and The Earls (“Remember Then”), appear live on stage in the second annual Rock & Roll is Here to Stay Concert. Also joined by Barbara Harris & the Toys and The Ragdolls: A Frankie Valli & The Four Seasons Revue, this incredible lineup of artists — many of whom are Rock and Roll Hall of Fame Inductees — celebrates

American pop before the “British Invasion” when impeccable harmonies and soaring vocals ruled the day (and the airwaves). So shine up those saddle shoes and dig out that letterman sweater and head to Lehman Center for this dream-come-true event.